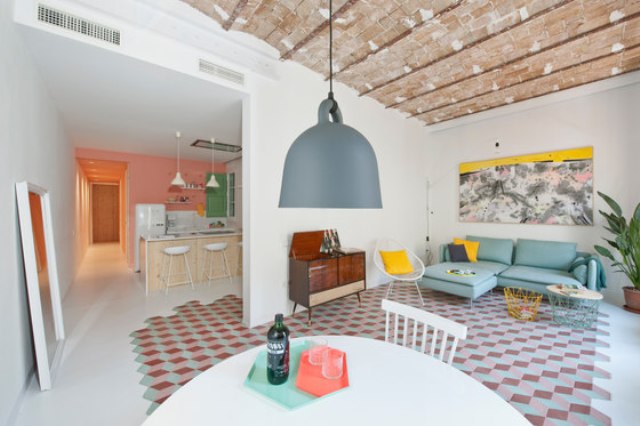 The property occupies an art nouveau building of the Eixample district of Barcelona and was fully renovated by CaSA and Margherita Serboli to become a holiday apartment for an Italian family.

The original layout wasted considerable space and was poorly orientated. The client’s brief was used a guideline: their wish was to have three double bedrooms and a home that would highlight and underline the early 1900 detailing of the building, through a design that using a contemporary language.

The block that embodies the two minor bedrooms grows around the second axe. This light pink colored volume separates the day area from the area ad the inner end of the property, which became the suite.

This master bedroom, previously occupied by kitchen and a studio, forms an open space of almost 20sqm, which includes the bathroom that is separated by a change of floor level. This solution allows making the most of the light coming from the great original window frame that occupies almost all the wall facing the inner courtyard.

The client’s will to retrieve the art nouveau essence has led the project to the restoration of original features while adding new components that could sustain the same language without betraying his own contemporaneity. For this purpose some of the original features have been rescued, like the original windows woodwork, or the Catalan vaults, previously hidden behind a false ceiling that now expose their original terracotta finish, typical of the building’s period.

For the same reason it was decided to intervene reinterpreting one of the most characteristic elements of art nouveau apartments in Barcelona: the floors (which in this case had been previously replaced by a synthetic parquet). The hydraulic tile represents a typical element of this kind of early twentieth century dwelling; it was the customer’s wish to reintroduce them in this project.

The secondary bedrooms block is shaped as a pink box whose volume is inserted with its tonal load between the white spaces of kitchen/ hallway and a second body, of natural wood. The color white prevails inside the pink block and it’s pink becomes the color of the original window frames. The exterior green color of the same windows enters the room through the window shades becoming a further element of color.

At the end of the corridor, a pine-clad block disguises the general bathroom; this same timber volume becomes the suite’s walk in wardrobe – once passed the sliding door that’s the suite threshold – and protrudes into the bedroom turning into wooden nightstands, that double as steps to access the suite bathroom. 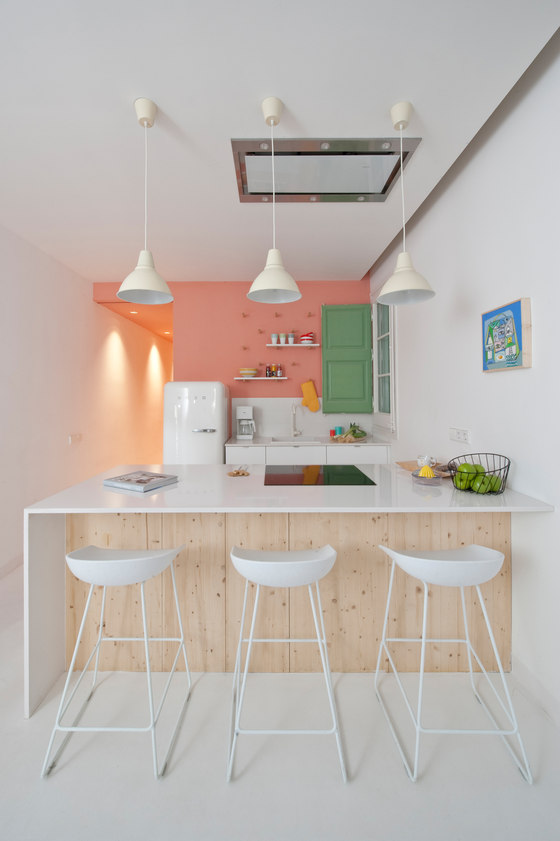 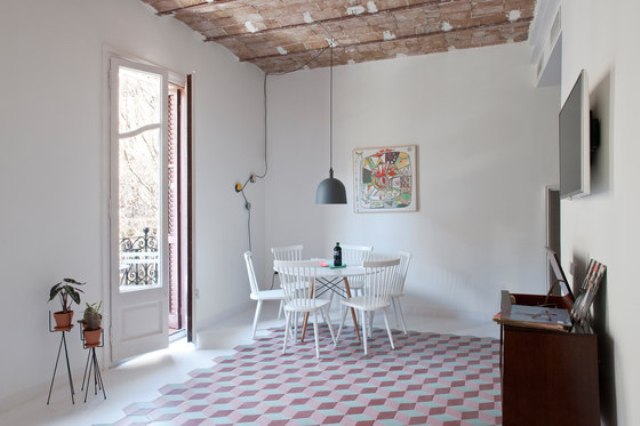 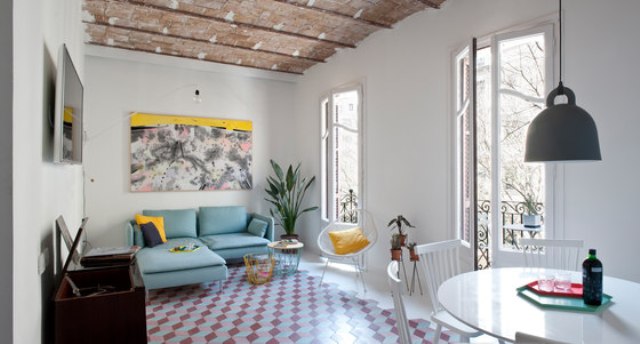 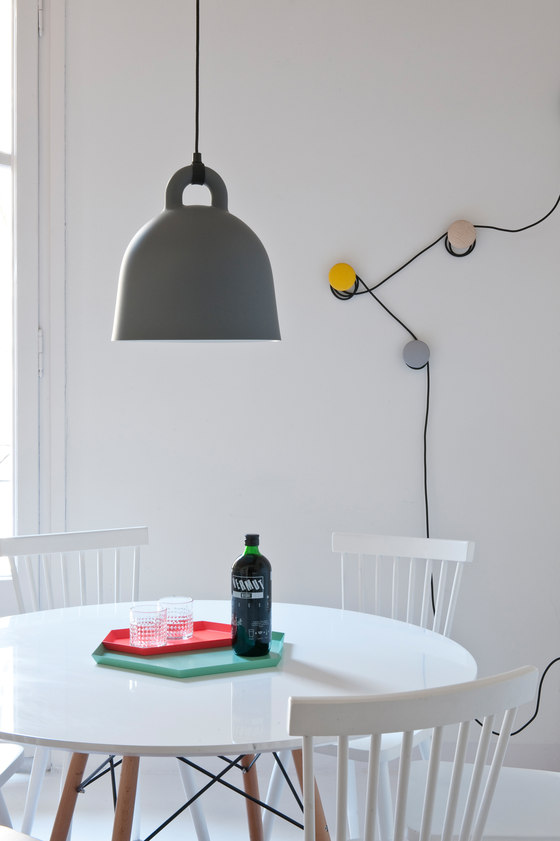 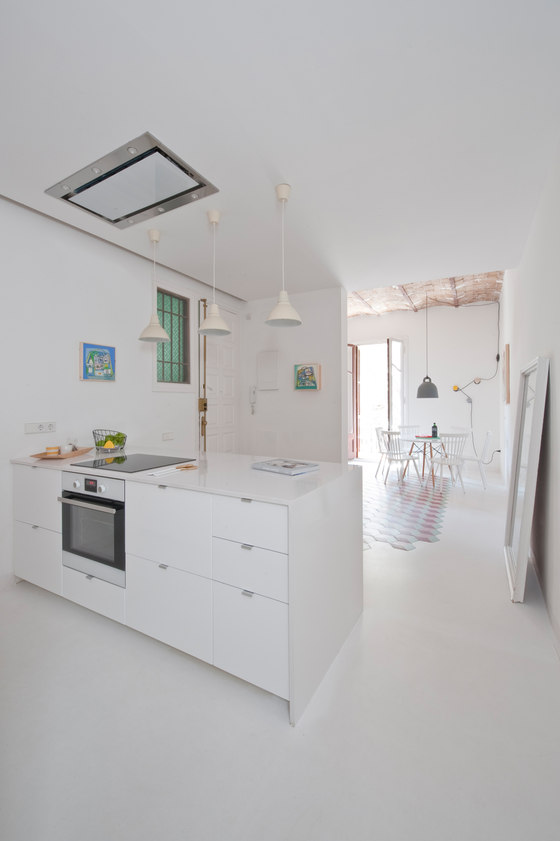 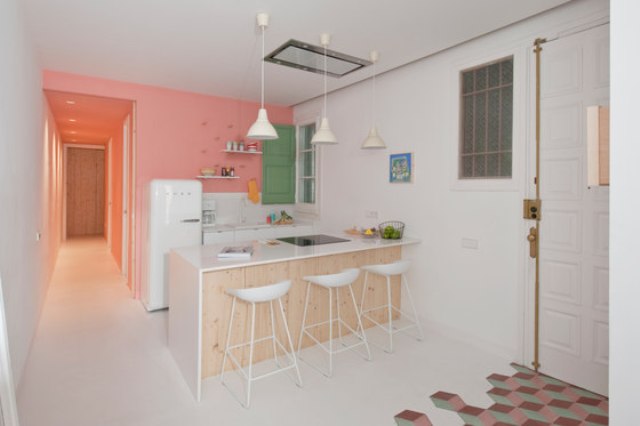 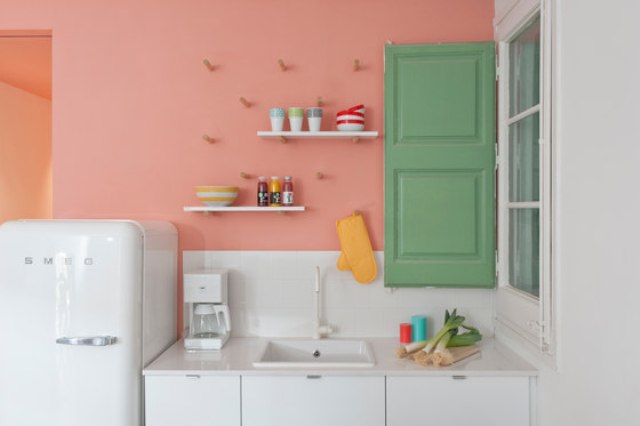 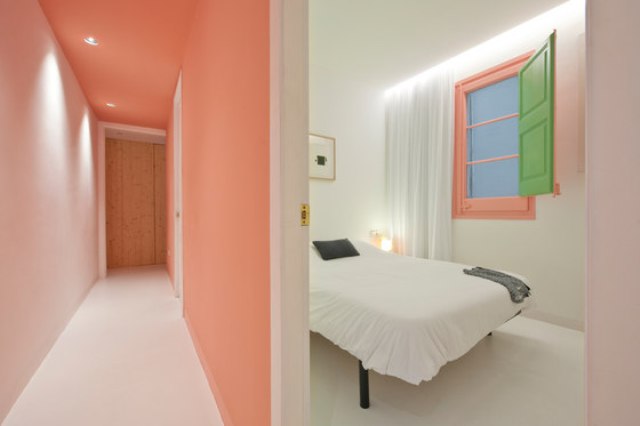 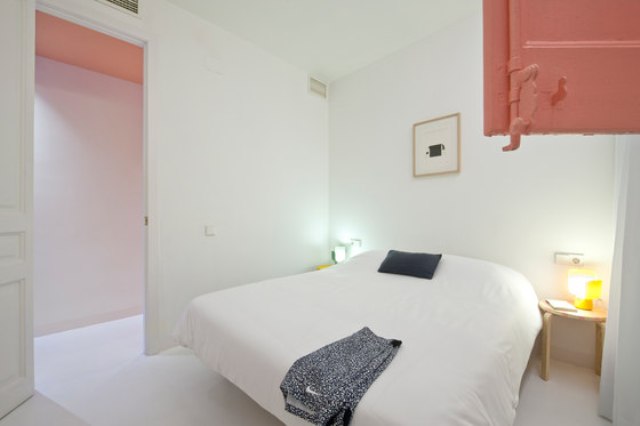 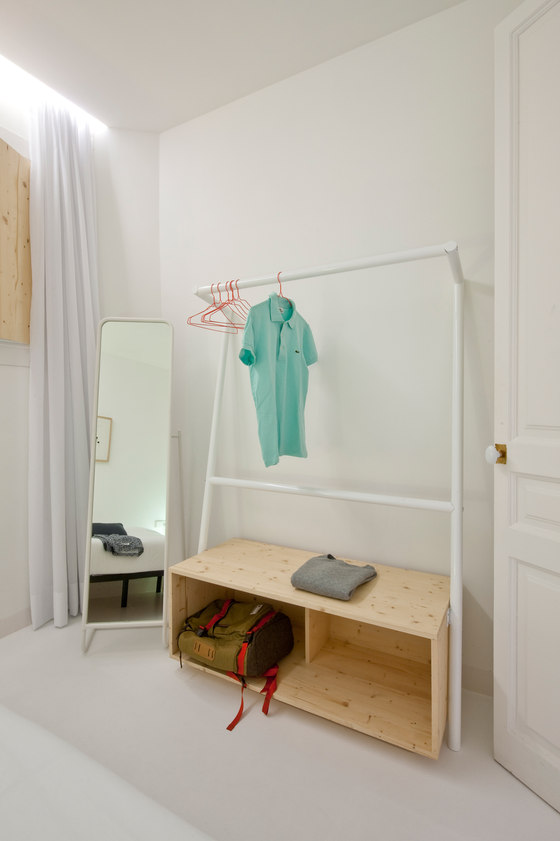 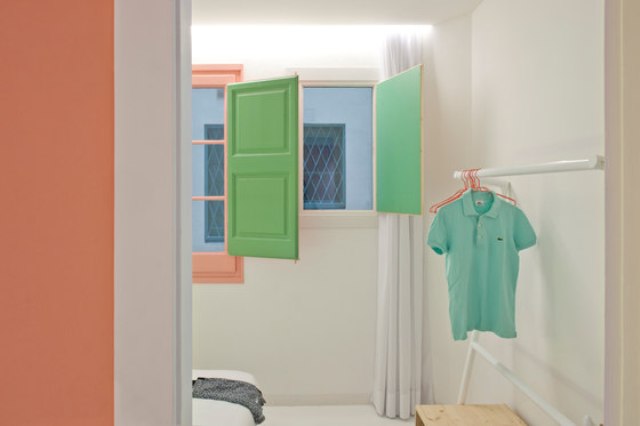 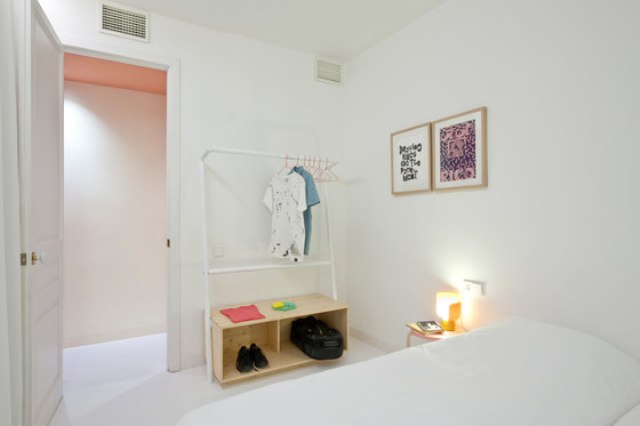 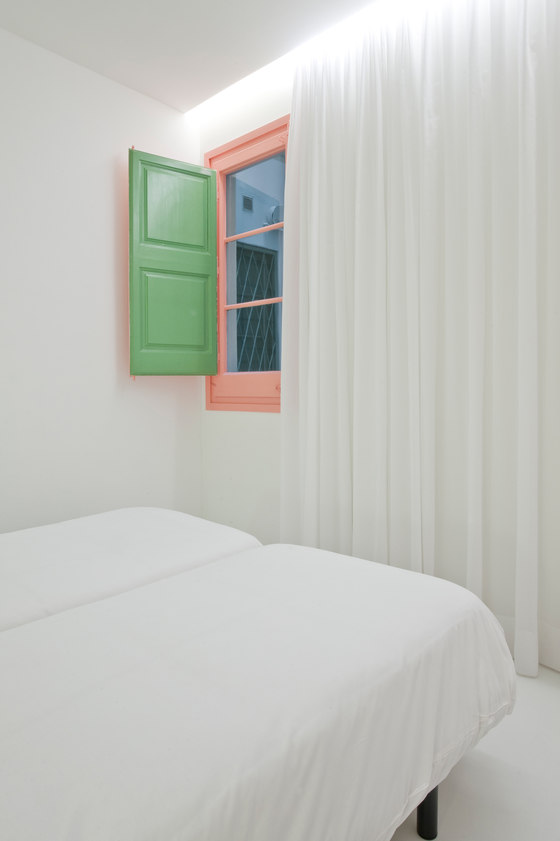 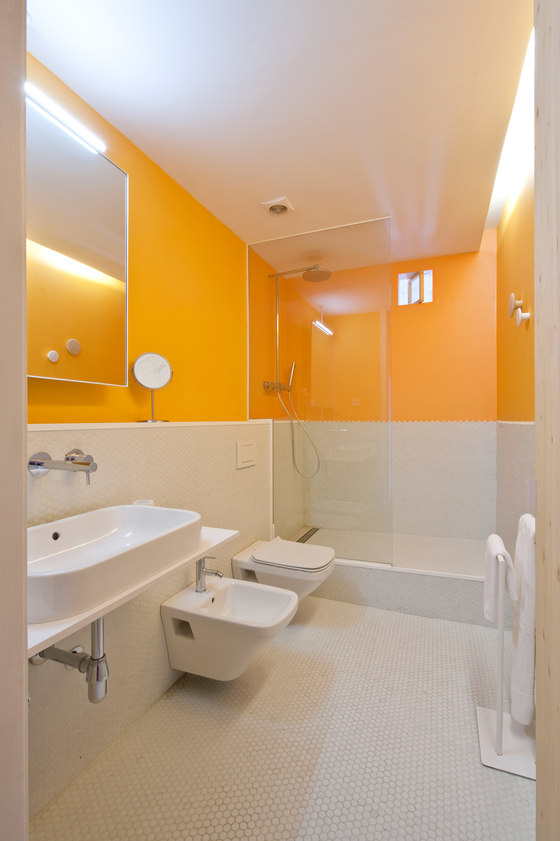 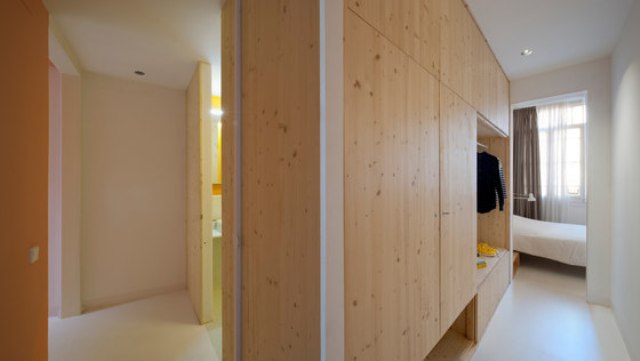 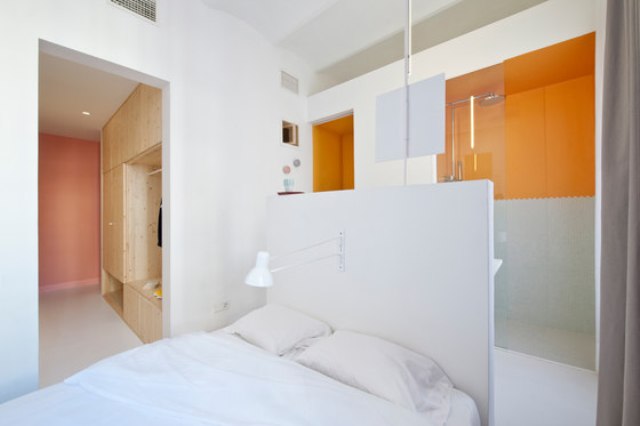