CLB Architects co-founder Eric Logan has renovated his self-designed home in Jackson, Wyoming, adding a cold-rolled steel gabled roof and a new kitchen. The house was originally built in 1997 and was called Logan Pavilion. Its long, low form and gabled roof echo the hay sheds that populate the rural landscape in the shadow of the Rocky Mountains.

The new roof is made of corrugated cold-rolled sheet steel that is naturally weathering to an attractive ruddy hue. Deep overhangs shelter the house from sun and snow. Logan had always wanted a metal roof for the house, but had originally been thwarted in this plan and forced to adopt a shingle roof.

When the house was first built two decades ago, it was done on a tight budget and constructed in only four months. Its kitchen was beginning to show signs of wear and tear, so Logan renovated the room using more robust materials this time around. The finish selections that were employed in the renovation are a complement for the refresh and include black steel and white lacquer.

Black steel is complemented by the house’s original material palette, which includes oiled concrete floors and wall paneling made from oiled masonite, a kind of engineered wood. Floor-to-ceiling glazing in the living areas frame views of the Teton mountain range. Logan also re-stained the house’s exterior and added new decking as part of the renovation. There are four decks, one on each side of the house. The largest deck is semi-sheltered by the house’s roof, which overhangs by several meters supported by slim columns. 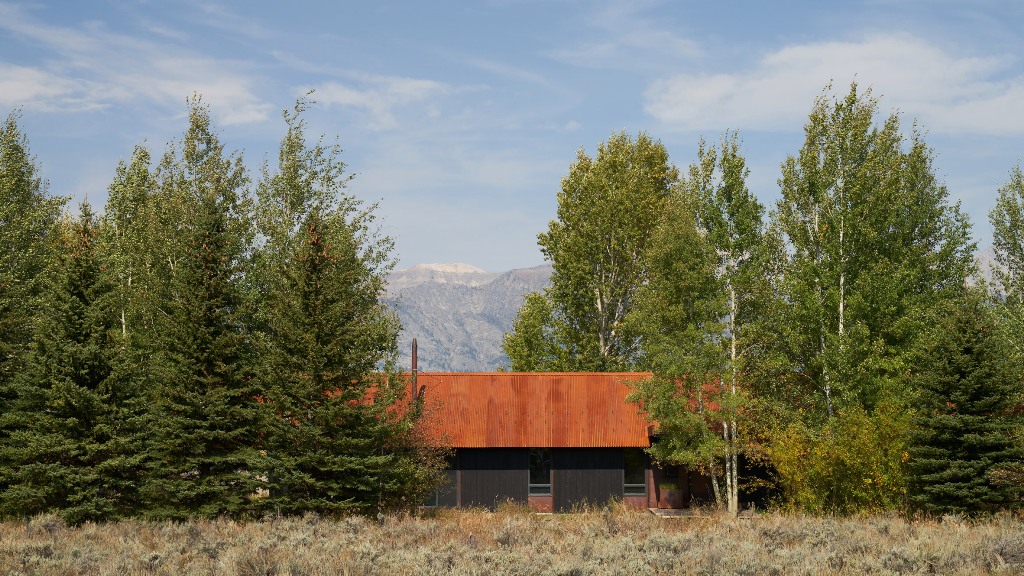 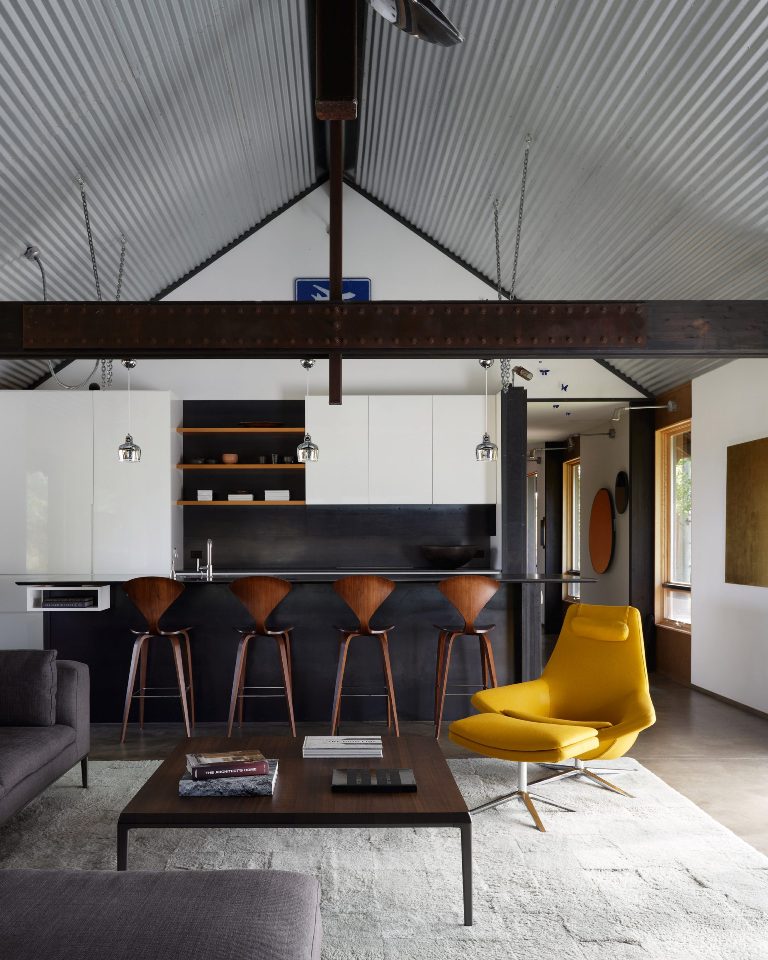 The open layout features a kitchen, a dining space and a living room, with sleek white cabinets, a grey sectional and a yellow lounger 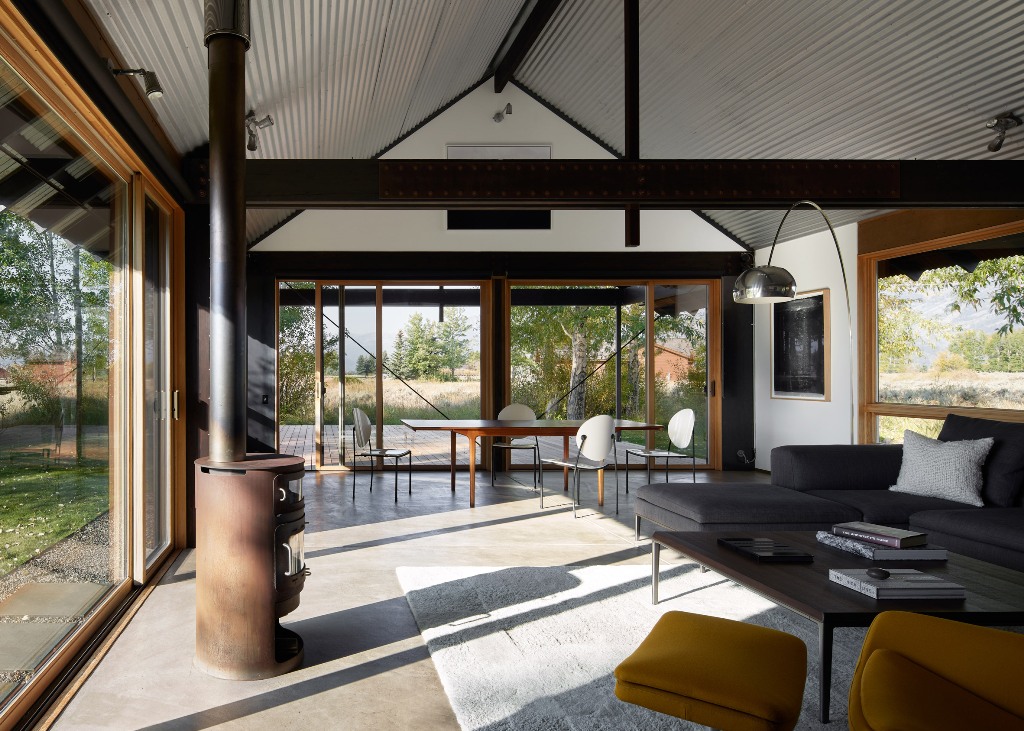 A more formal dining zone is located further, next to a glazed wall to enjoy the views 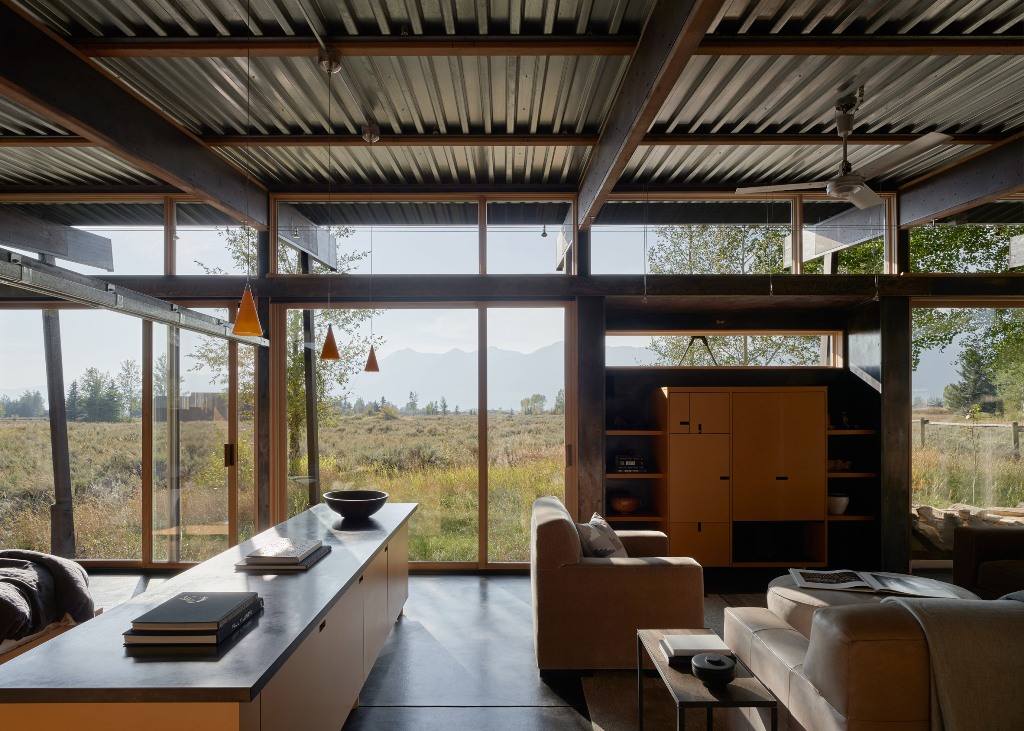 Most of the walls are glazed for light and views, and the furniture is contemporary and mid-century modern 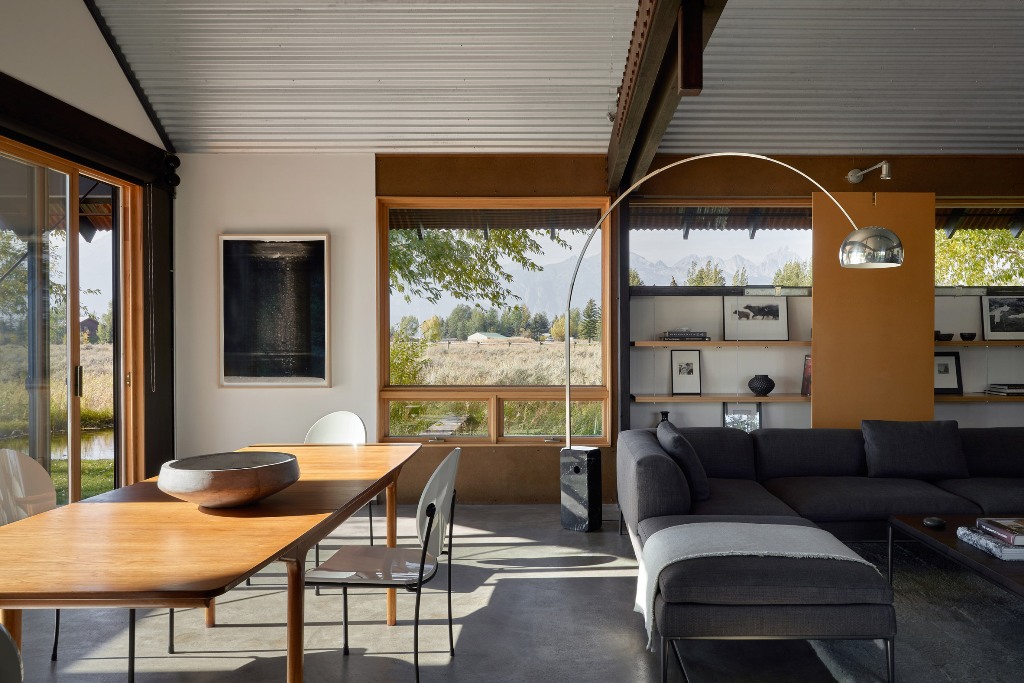 The color palette is restraint and simple, to merge with the nature outside 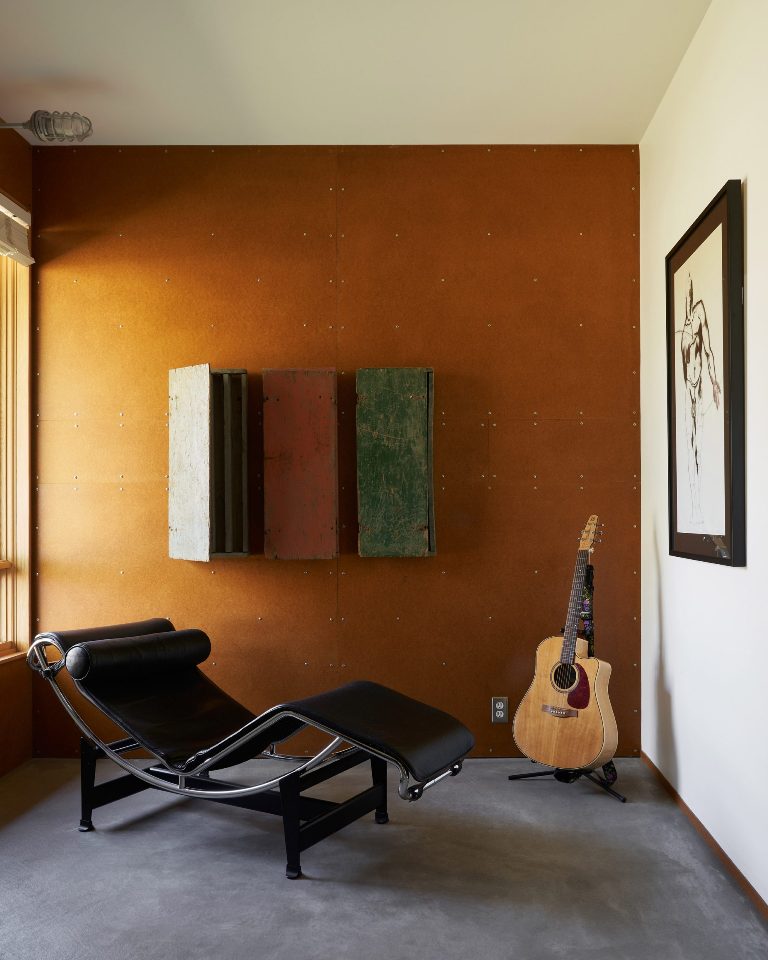 Panels of masonite clad the walls 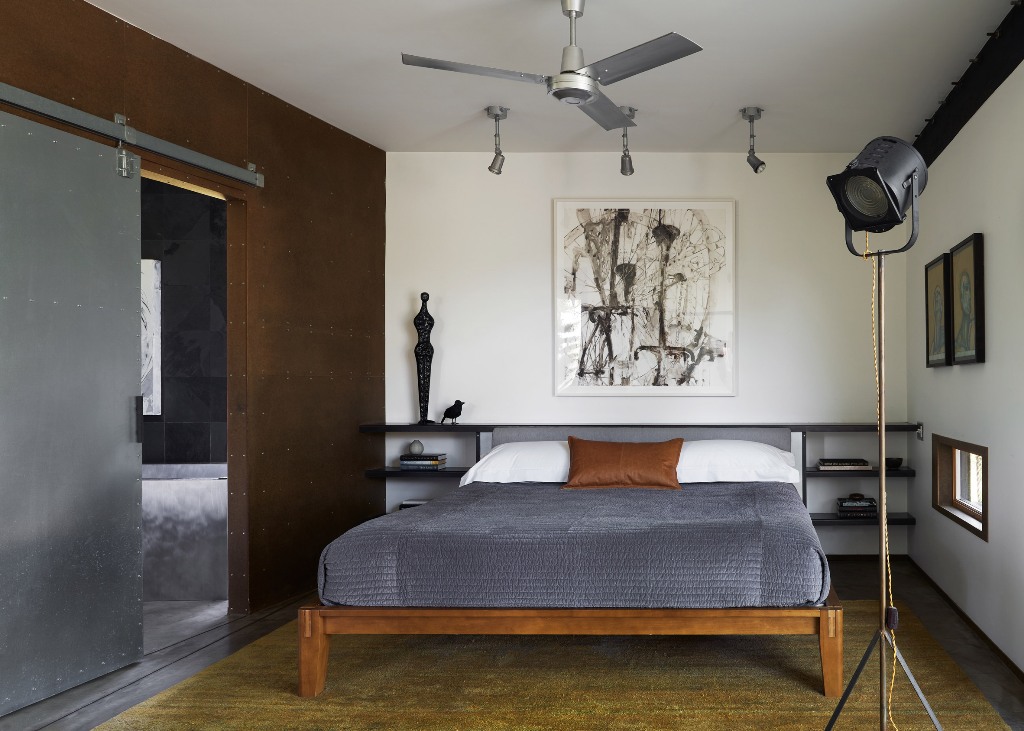 The bedroom is very laconic, with a bed, some open shelves, an artwork and lamps 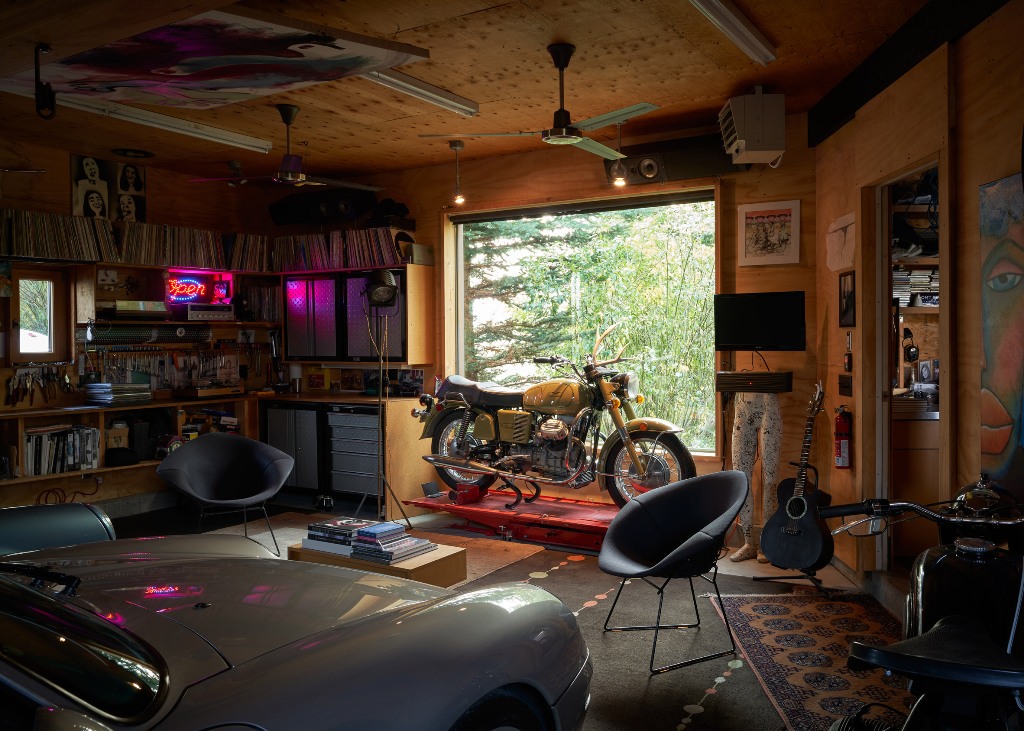