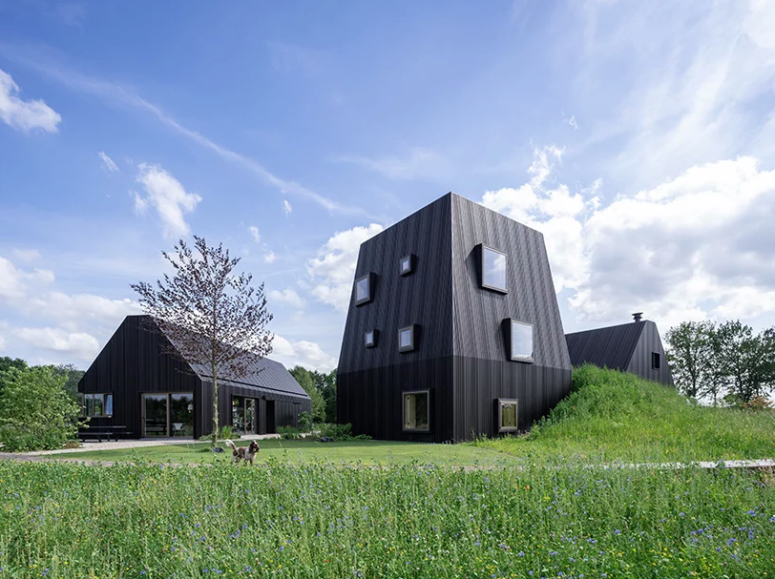 In the design of Villa Vught, a remote residence in the Dutch countryside, Mecanoo sought to reinterpret the region’s farm typology. Traditionally, the Dutch Hoeve is an ensemble of farmhouses and living quarters loosely clustered around a courtyard. The central open space is protected, yet open to the surrounding landscape — a spatial arrangement that guided the configuration of the project.

The home’s functions are distributed within three distinct volumes, which Mecanoo shaped to resemble a small village. While two volumes appear as gabled barns, the taller volume captures the view of the wide landscape and forms a striking contrast with the other buildings on site. This structure, the site’s most prominent building, contains the master bedroom on the ground floor, children’s rooms on the upper floors and a roof terrace.

Of the two barns, one contains a living room, a kitchen with a dining area, and a large veranda on the south-west side, while a workspace and playroom are found on the first floor. The other barn features a cooking studio where up to 20 people can participate in culinary classes, workshops, and team-building activities led by the client. Next to the studio is a garage, storage area, and a guest suite on the first floor.

The layout seeks to connect the residential functions, while maintaining the detached configuration of a traditional farmstead. To this end, a half-sunken corridor, concealed beneath a grass mound, links the taller volume with the barn’s living room. However, the barn containing the cooking studio and guesthouse is completely detached, maintaining sightlines from the courtyard to the surrounding landscape. Wood, a material that is both sustainable and visually warm, is used for the structure and the interior finish. The three buildings have a cross-laminated timber structure and european silver fir interior surfaces.

The villa is composed of three buildings, a usual house with unusual window placement and two barns 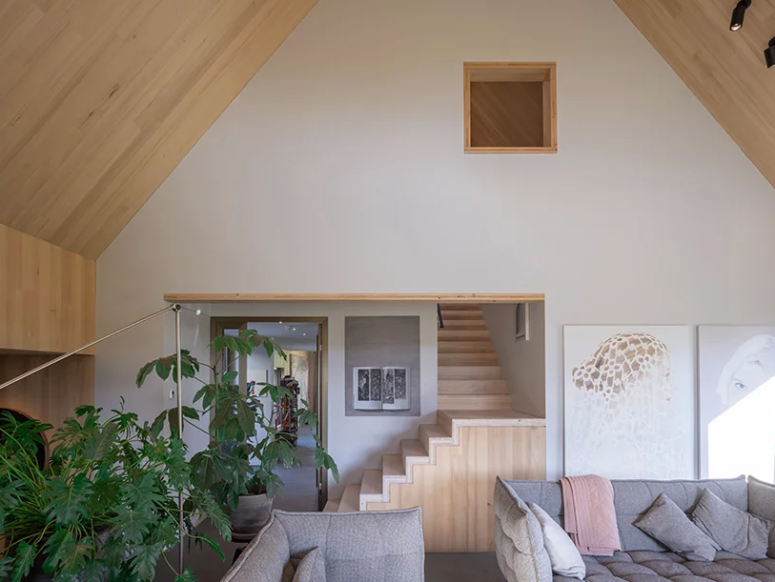 The interiors are light-filled, with much light-colored wood and neutral furniture 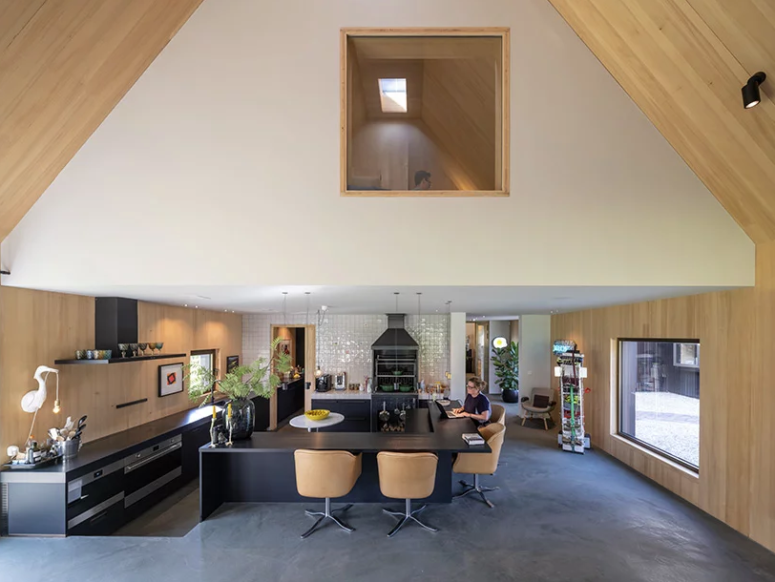 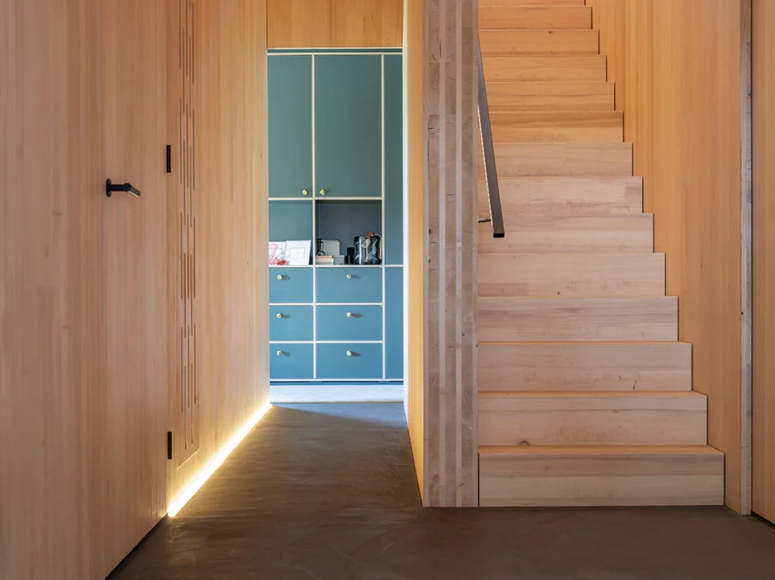 You'll see lots of light-colored wood in decor to hint at barns, and much new - LED lights, bright contemporary furniture 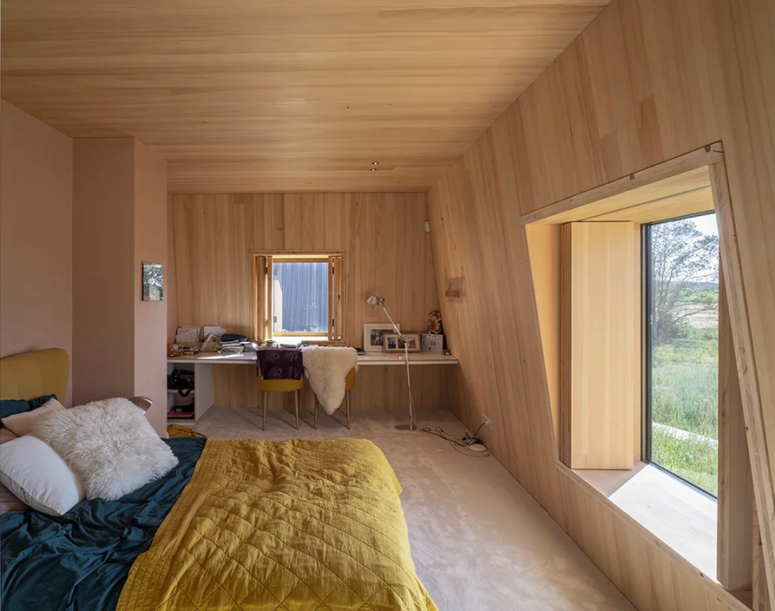 This bedroom is done with plywood completely, there are large windows, a mini home office in the corner and a large bed 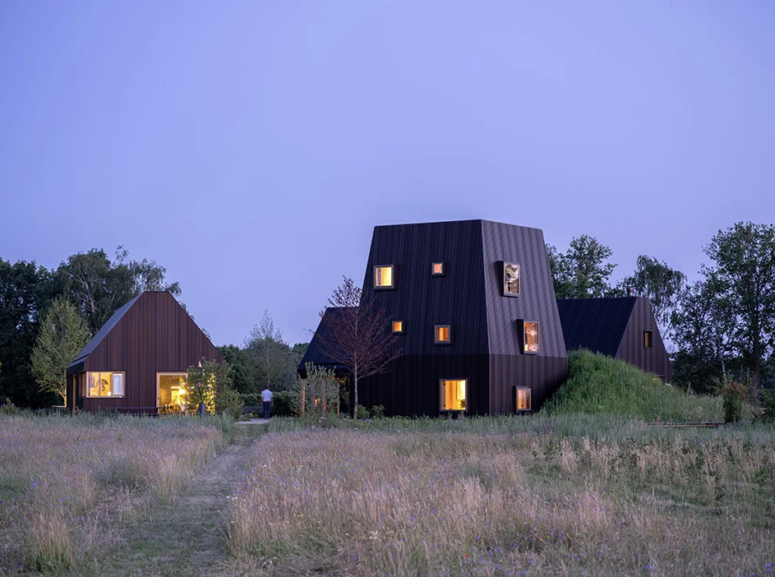