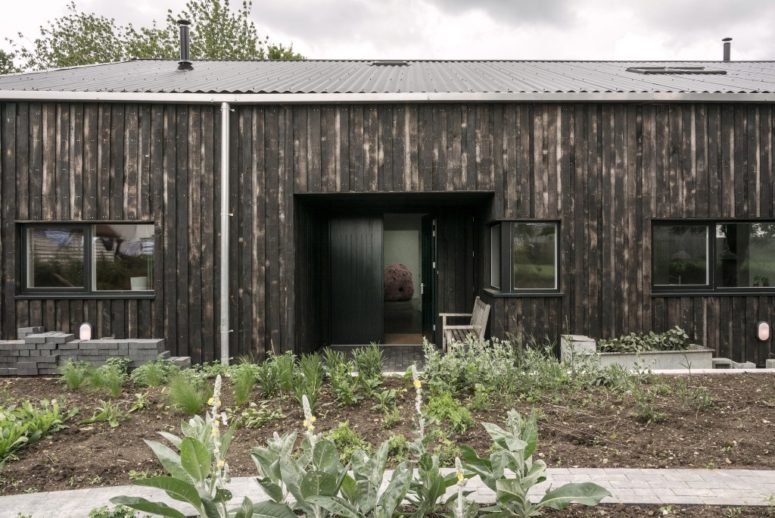 This home used to be a usual tractor shed, which was renovated and turned into a home, it was clad with scorched wood and resembles a barn

Called the Tractor Shed, the house was built by HeathWalker, and yeah, it used to be a real tractor shed. The architecture studio turned it into a house clad in timber cut from trees on the client’s own land and scorched using a blowtorch.

The house is built for an artist who grew up in a farmhouse with a love of open landscape and barn-like spaces but also a fascination for cozy, hidden-away rooms. HeathWalker made use of its precast concrete frame and agricultural proportions. Rather than being hidden in the walls and ceilings, the precast concrete supports of the former shed burst through into the interiors, contrasting the new finishes. Polished concrete floors have been added downstairs, and solid oak boards used on the upper level.

A restrained palette of materials is left as natural as possible. The simple structure has been subdivided into two floors of both single and double-height rooms, with large living and kitchen spaces below and bedrooms above. The dramatic scale of the barn is fully revealed in the main studio and open-plan kitchen. The lowered ceiling height in the adjoining dining area is intimate yet expansive, opening onto the garden and landscape beyond.

The home’s entrance sits tucked on its western elevation, replacing what would have been large barn doors on the shed’s gable ends. Instead of doors, large windows now to look out across the countryside. Onside, a small hall connects a library, double-height living room, dining room and double-height kitchen, illuminated by windows on each gable end as well as skylights. At first-floor level, bedrooms take advantage of the sloping roof to create bright, open spaces, with areas for storage and a dressing room tucked into the eaves. 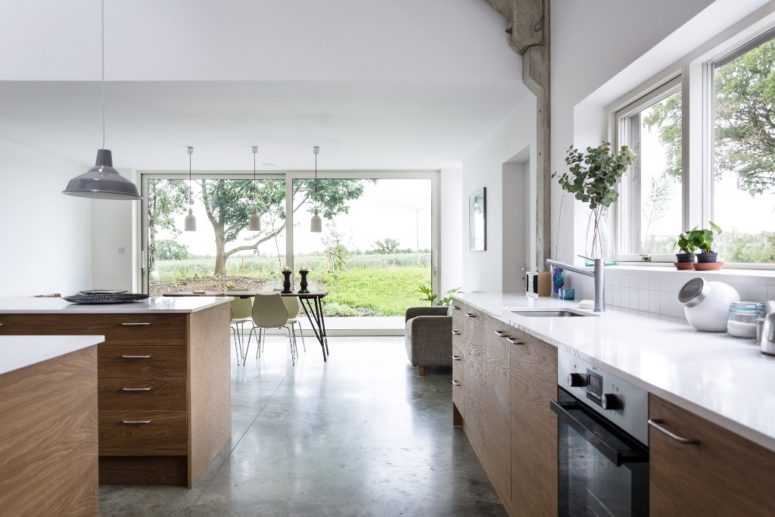 The kitchen and dining space are united, opened to outdoors and thanks to that filled with natural light 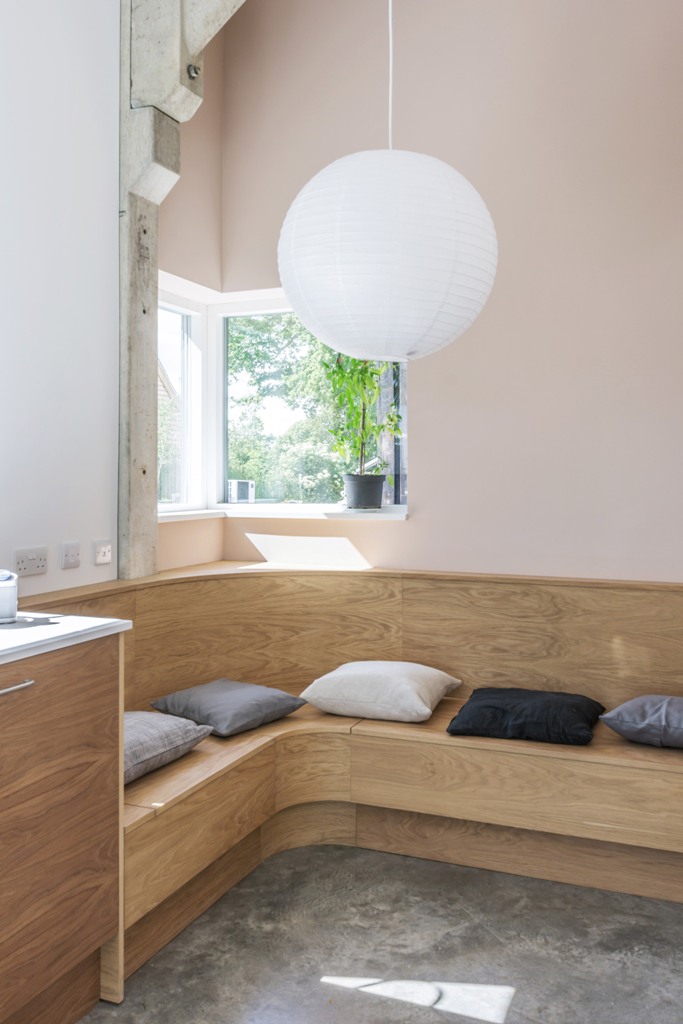 There's built in furniture created right for the project, and it customizes the spaces a lot 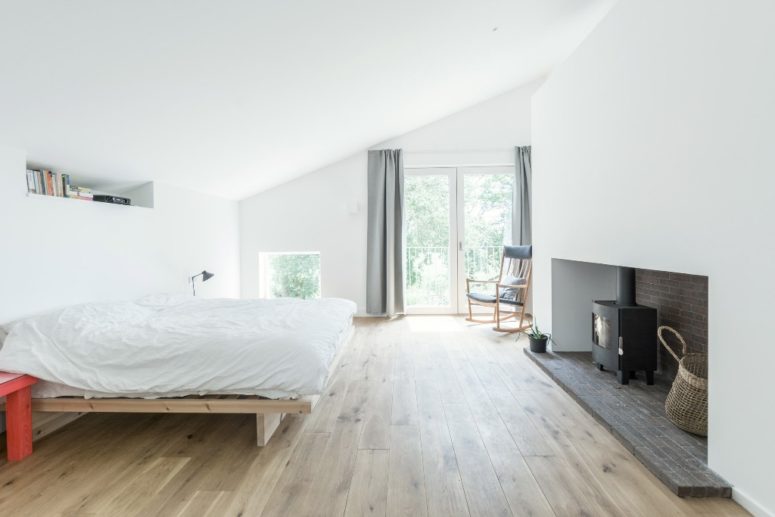 The master bedroom is done with a simple bed, a hearth, some simple furniture and severla windows 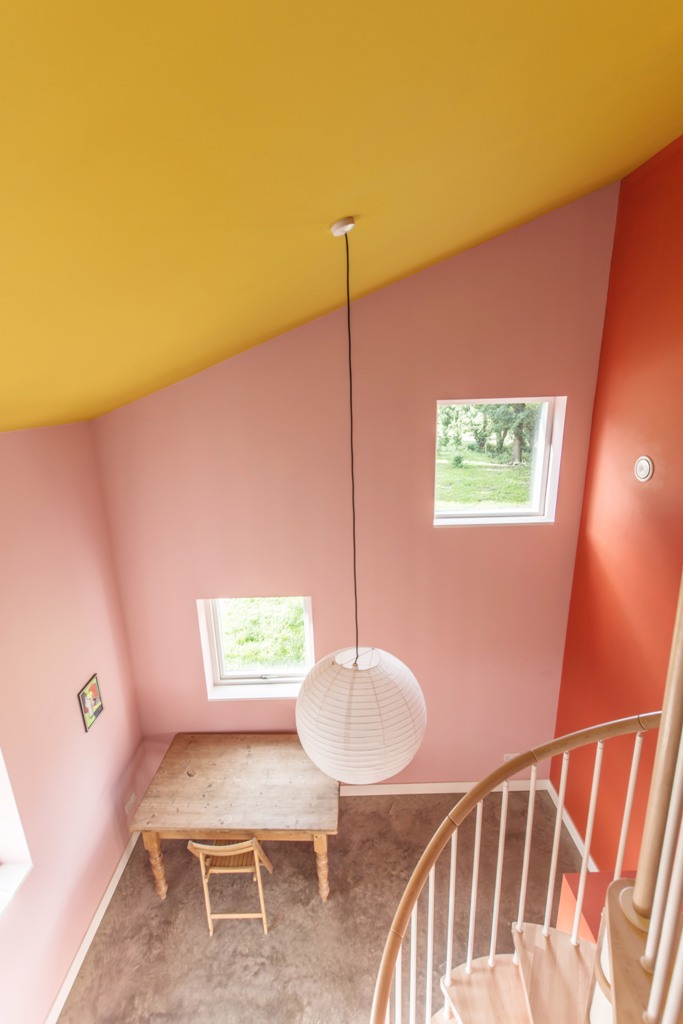 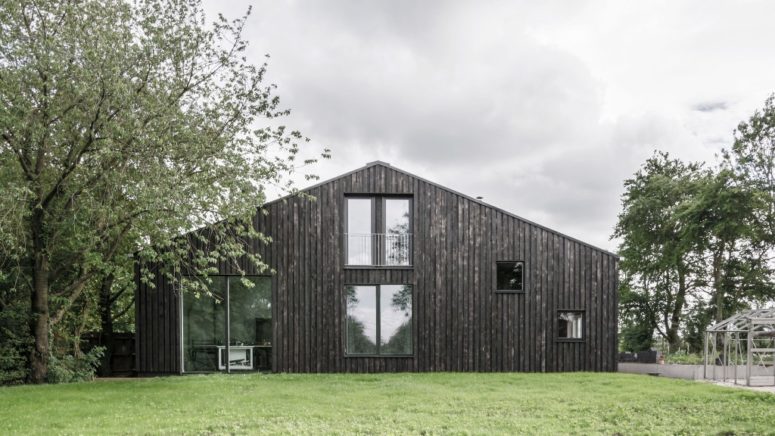