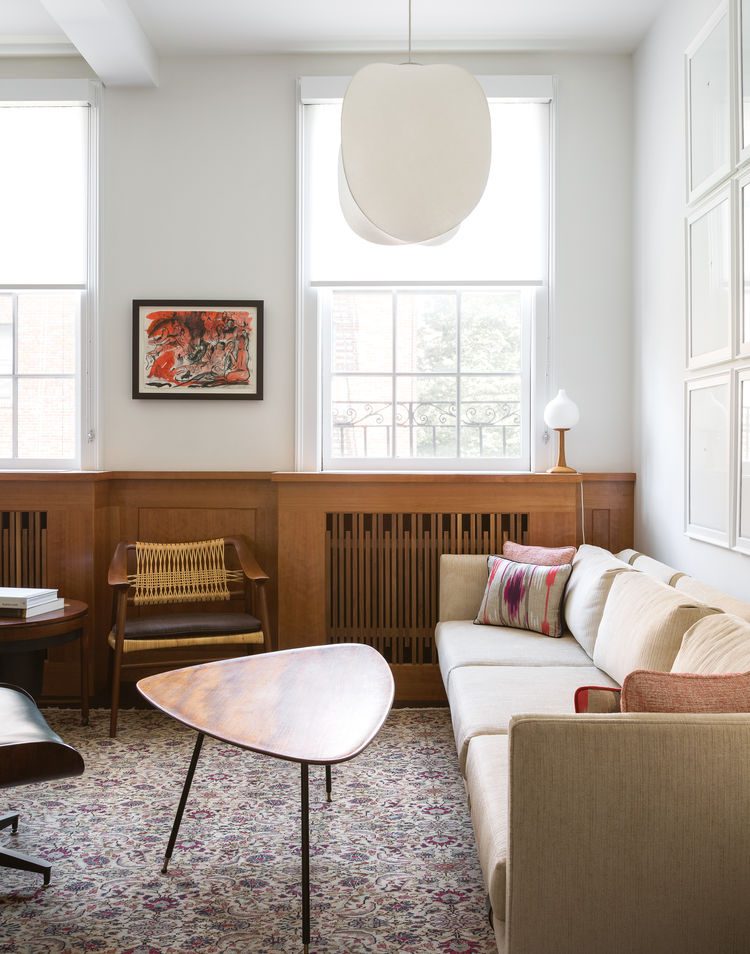 This compact New York City apartment is chock-full of vintage highlights and it was refined by Reddymade Design. Located in a 1910 building that had been converted to a co-op in the late 1980s, the apartment is a compact 725 square feet. The owners live in Los Angeles in a mid-century modern home, so they wanted the same style for their Manhattan retreat.

The designers created a mid-century home with clean lines and simple décor adding touches of Japanese flavor here and there. The color scheme is soothing and natural – white, beige, buttermilk, various earthy shades and just a bit of patterns, for example, a rug on the living room floor. Chic and refinement was given with luxurious types of wood, all-natural textiles and other posh touches. The home is full of various mid-century modern furniture by different designers and there are some adorable artwork pieces, too.

In the living room, a sofa by esteemed midcentury designer Milo Baughman joins a Bambi lounge chair by Norwegian designers Rolf Rastad and Adolf Relling. The pendant light is the Mori Leaf model from Rich Brilliant Willing. Architect Matthew Viederman designed new finishes for the floors, bathrooms, and kitchen. Reddy’s team spearheaded the furniture selection as well as the millwork at the radiators.

The dining set was designed by midcentury Danish deisgner Hans Olsen. It’s illuminated by a duo of Mori Gourd pendants, also by Rich Brilliant Willing. A significant art piece by Dana Louise Kirkpatrick and Bernie Taupin anchors the living room. In the office, a 1950s desk by Paul McCobb is complemented by an Eames chair and the Boi desk lamp by David Weeks Studio. The lighted mirror is a piece called “Through the Looking Glass” by Earl Reiback.

The Simple Hi bed by Formstelle defines the bedroom, which also features a custom nightstand by Reddymade Design, Levo sconces by Cerno, a vintage Moroccan rug, and an Isamu Noguchi pendant.

The chair, by Danish designer Arne Hovmand-Olsen, was purchased through Wright. The dresser was sourced from Chairish.

Japanese touches were added with sculptural lights that remind of Japanese paper lanterns and with and cleanliness of the lines on the whole, which is characteristic of Japanese décor. 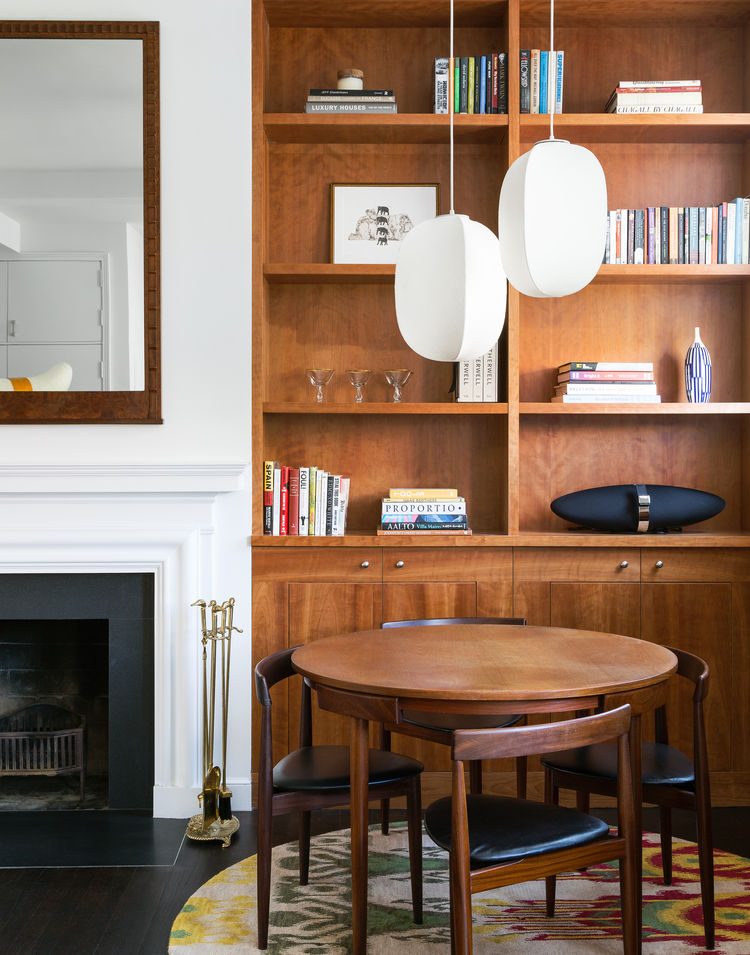 every piece of furniture was created by some designer 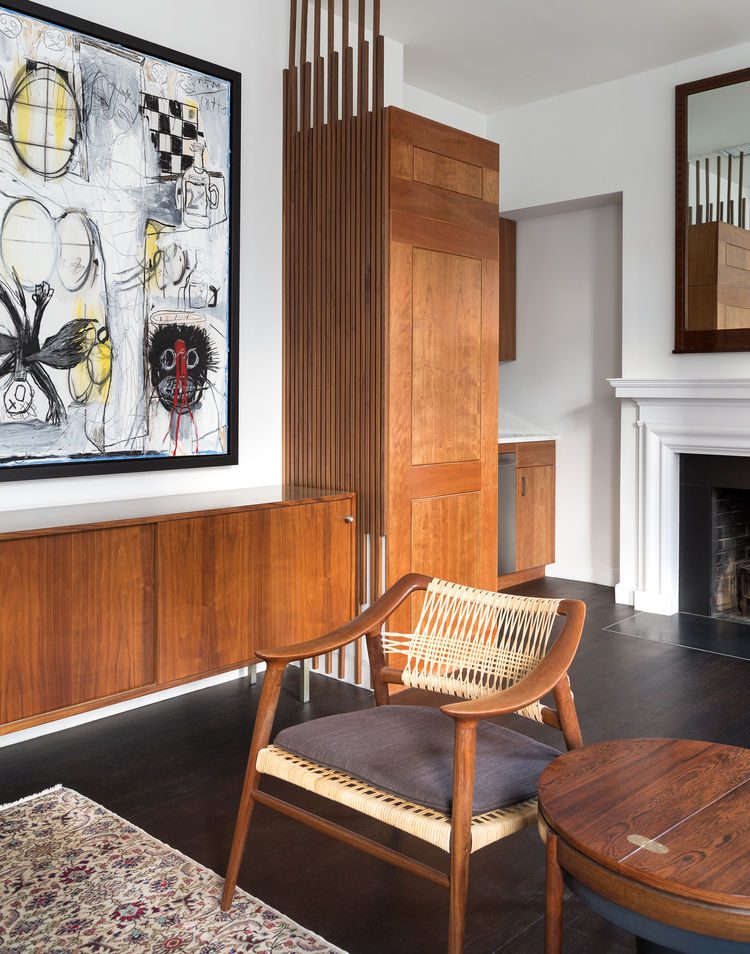 artworks give the space a character 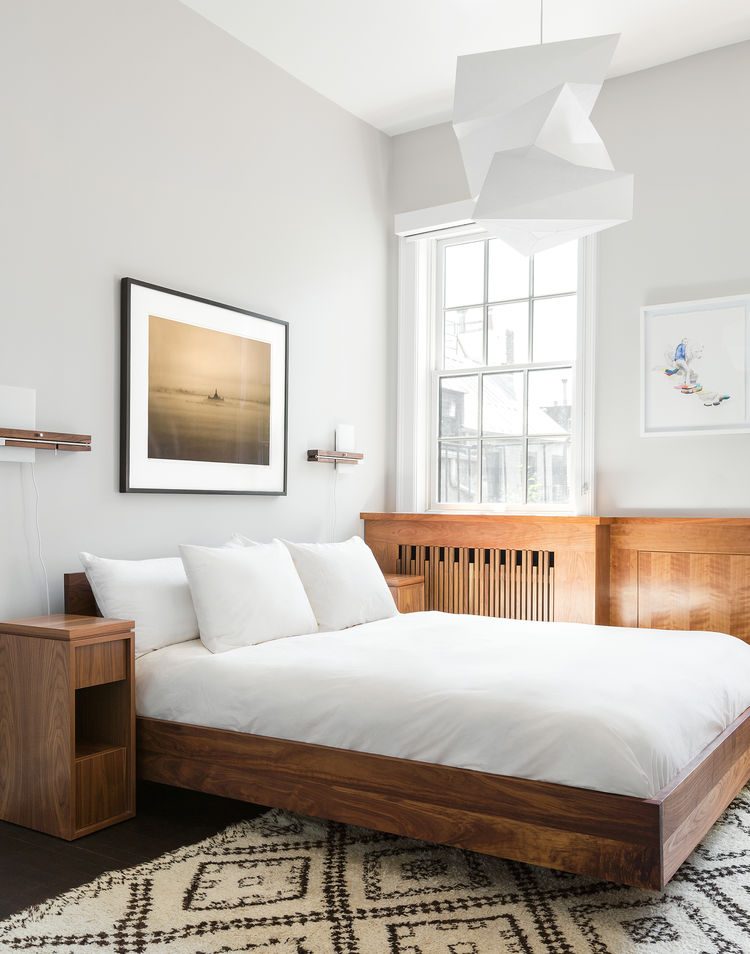 Japanese aesthetics is seen in the bedroom decor

artworks and a fireplace give the bedroom an original look