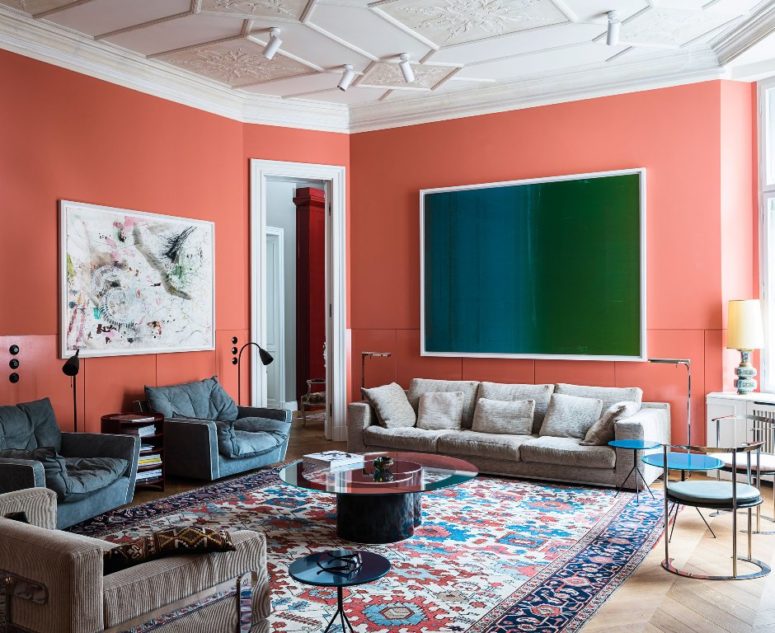 This eclectic apartment combines modernity and traditionalism, it's bright and statement-like

Berliner Zimmer is a recently renovated apartment in the elegant neighborhood of Charlottenburg in Berlin that lavishly channels the building’s architectural heritage while reveling in contemporary finesse. Meticulously detailed and exquisitely crafted, the apartment is a treasure with intricate interventions and bespoke furnishings whose understated sophistication belies a focus on functionality and a passion for the fine art of design, all the while reflecting the owners’ taste and sensibility.

The project’s name, Berliner Zimmer, refers to a common feature in the city’s 19th and early 20th century’s apartments, a large room that connects the front building with a side wing in the back, typically used as a lounge area. The architect enlarged the opening that connects the berliner zimmer with the adjacent dining room, thereby increasing any available daylight flooding in from the front of the apartment. The owners also wanted to include a large, colorful carpet they had fallen in love with, which profoundly influenced the room’s décor, including the choice of wall paint, a bespoke red-orange hue borne from a long process of trying out different color samples. Complemented by blue and beige tones, with glossy accents provided by glass and metal furnishings, and swathed in soft textures, courtesy of lush sofas and armchairs, the spacious room is both vibrant and calming, inviting guests to relax in an environment of subdued opulence.

Whereas the berliner zimmer harks back to the building’s original configuration, the rest of the apartment’s floor plan has been radically reconfigured. Like the rest of the apartment, the space features made-to-measure furnishings, built-in gems, and exquisite detailing such as the semi-recessed boudoir, whose curvaceous shape echoes the shape of the glazed lava stone washbasin, the free-standing bathtub and the restored radiator cover. Undoubtedly though, the focal point of the master bathroom is the circular silk carpet. 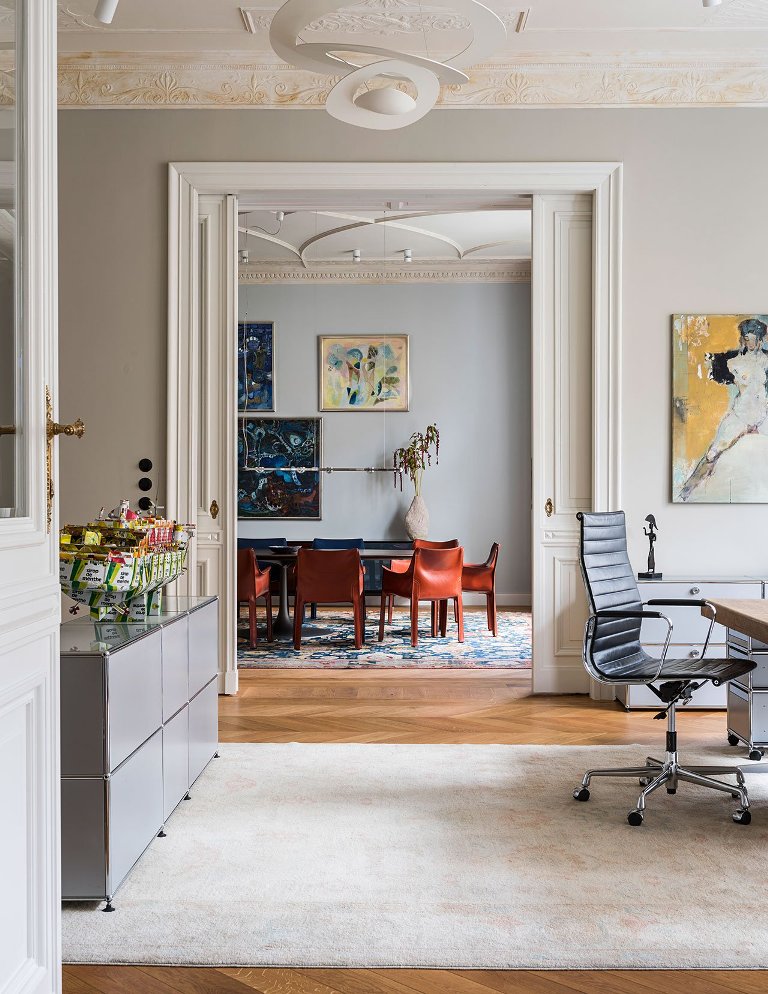 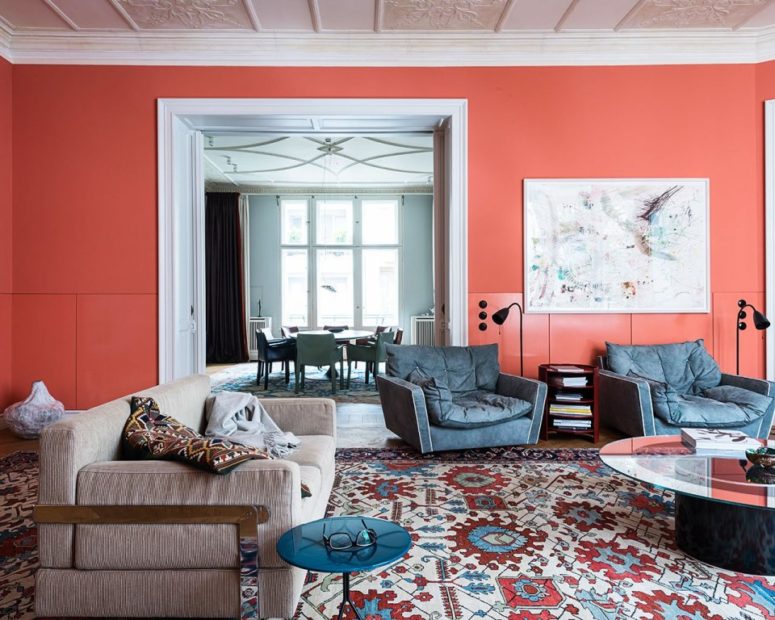 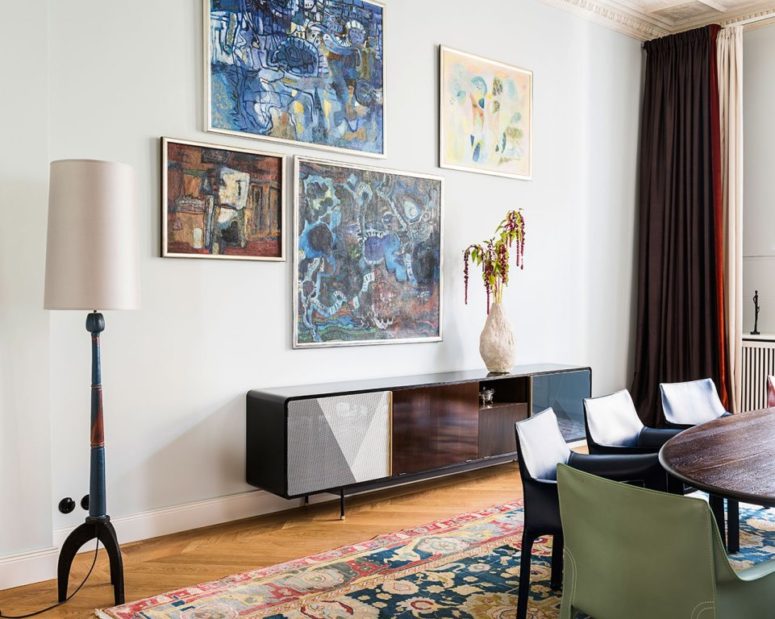 The spaces were brightened up with gorgoeus artworks, the chic mid-century furniture fits perfectly 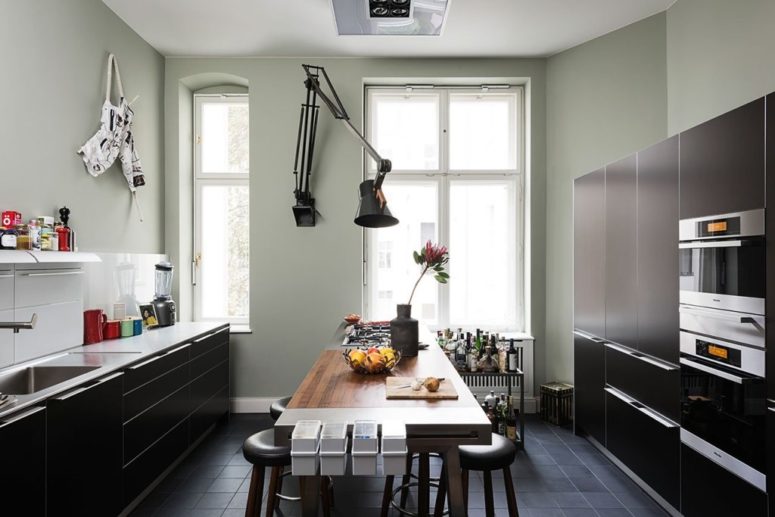 The kitchen is done with black sleek cabinets, with a statement wall lamp and a cool dining table 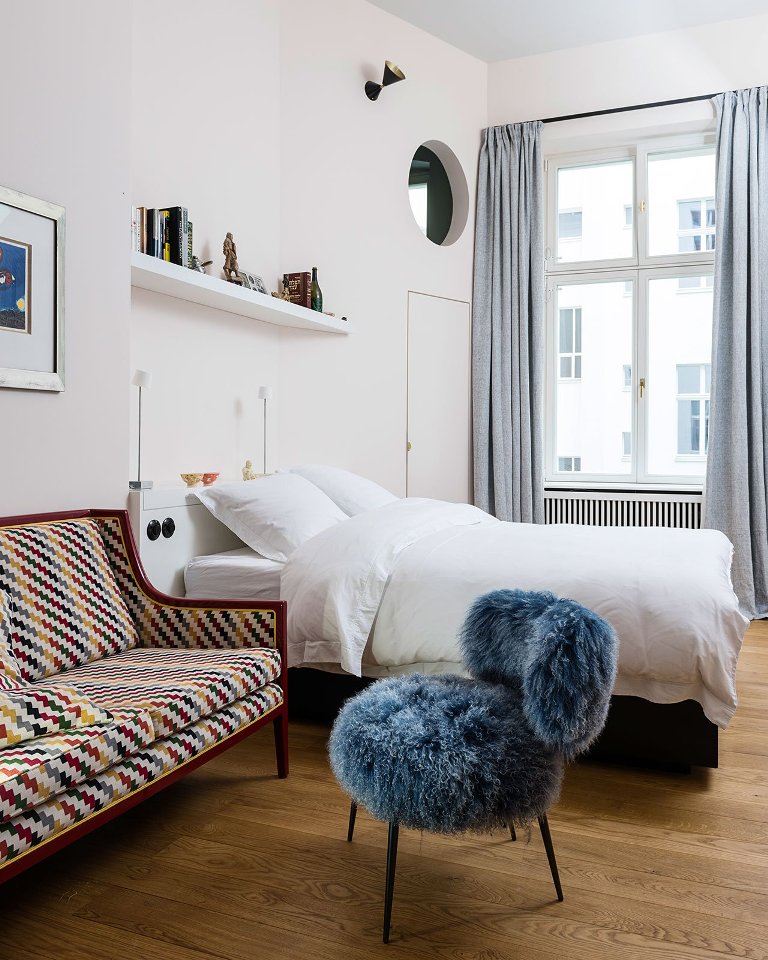 The bedroom is peaceful and comfortable, with brigth textiles and a comfy bed 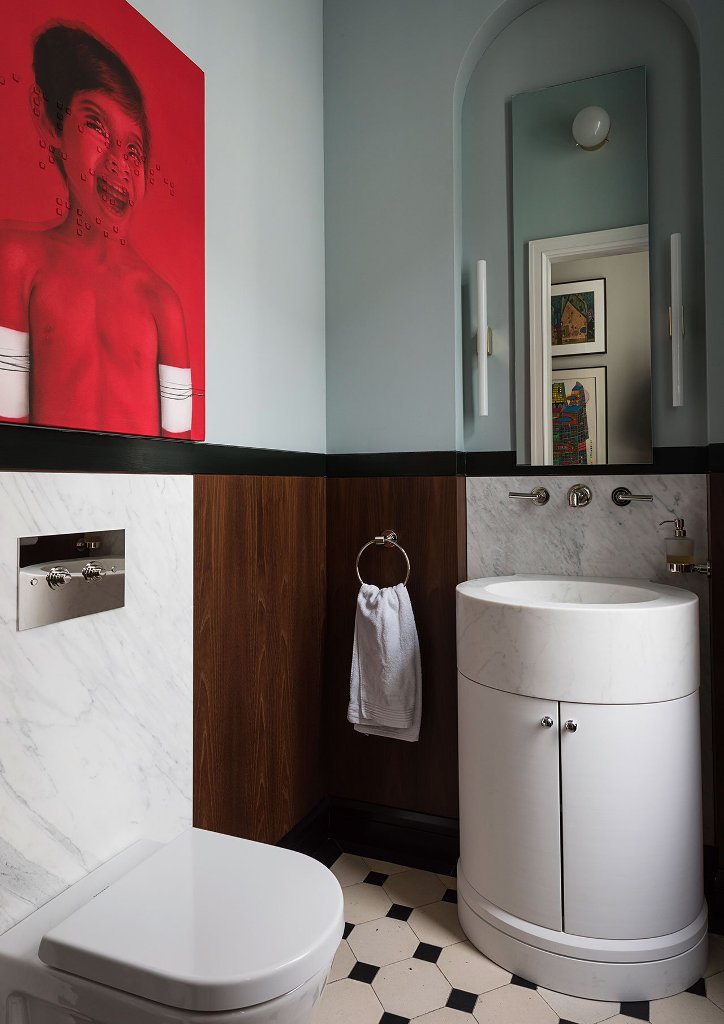 The bathroom is overwhelmed with a statement artwork in red 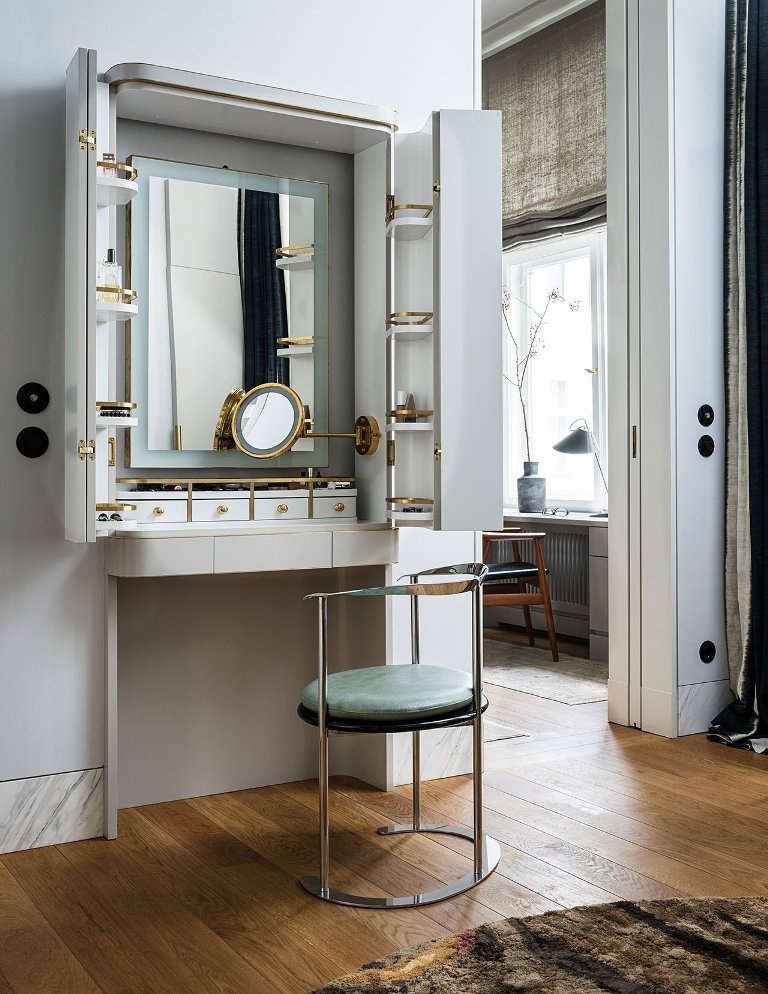 There's a gorgeous and functional makeup nook that can be hidden 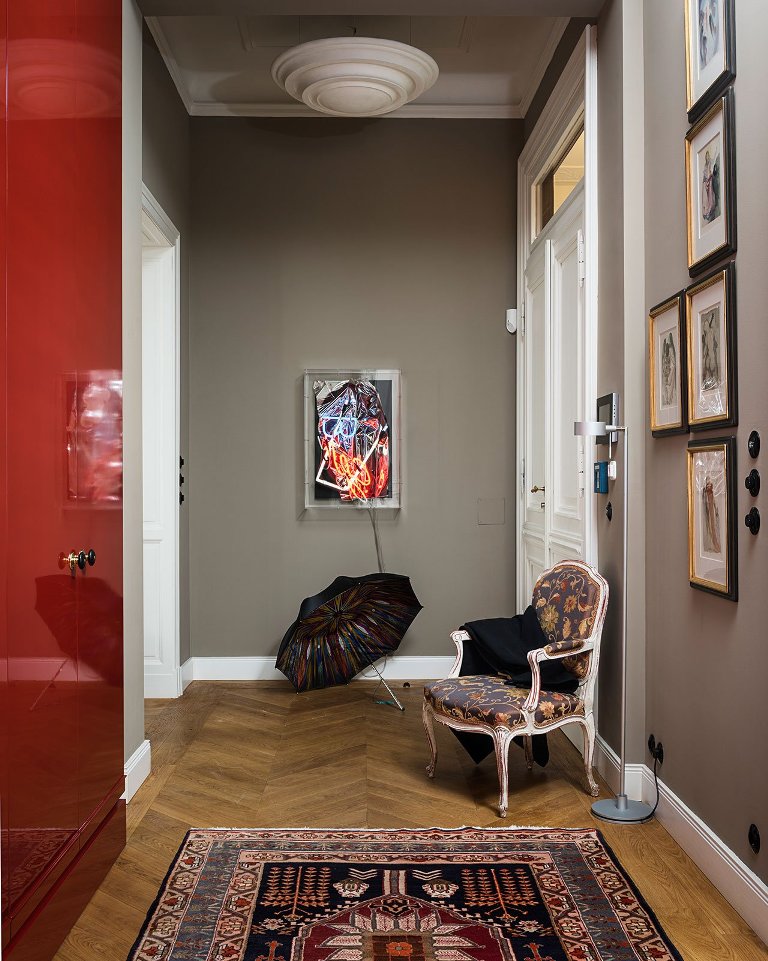