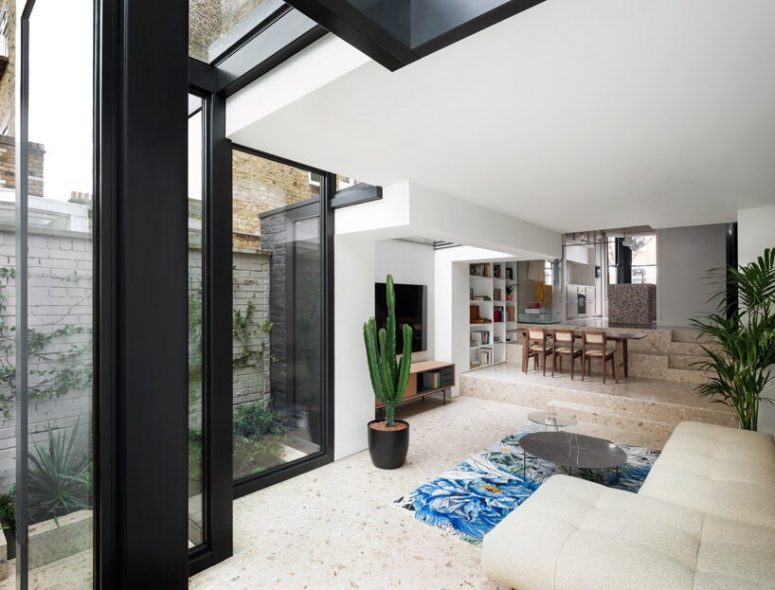 Bureau de Change Architects has renovated a Victorian terraced house in South London, complete with a rear extension of interlocking geometric glass volumes. Titled Frame House, the project comprises a series of undulating levels that create playful ledges, steps, and borders. Textures, graphics, colors and finishes have been selected to emphasize the home’s theatricality, including a series of undulating levels and terrazzo surfaces in different hues define the home’s interior.

For the rear extension of the house, Bureau de Change Architects has developed an unconventional arrangement of interconnected forms, challenging standard solutions to planning rules that determine a 45-degree angle between surrounding properties.

The interior echoes the rhythm of the geometric extension, with undulating levels carefully designed to curate views and delineate spaces. Selected materials and lighting enhance the theatricality of the interior, emphasizing the transition from the darker enclosure of the kitchen towards the brighter open spaces that lead to the garden. The shifting levels both inside and outside of the house create useful and playful ledges, steps, and borders, rendered in varying terrazzo tones that subtly identify the home’s distinct areas. Dining and living feature darker tones, while lighter tones define the border where the stone meets the garden, forming a language of planters and vertical surfaces.

On the second floor, bureau de change created a new master bedroom and a guest suite that follow the same material principles as the rest of the house. A bespoke terrazzo handrail forms the spine of this material journey, linking spaces throughout the house which unfold in a sequence of visually stimulating rooms. 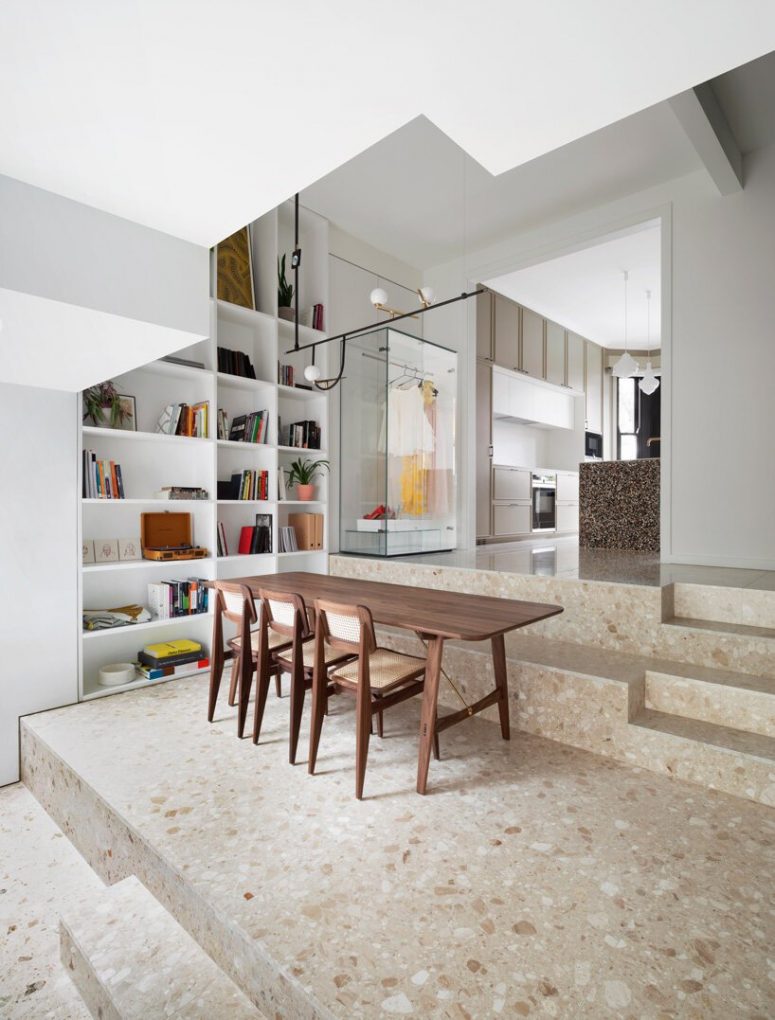 There's a large open shelving unit built-in on the left, a cozy wooden dining set on the steps 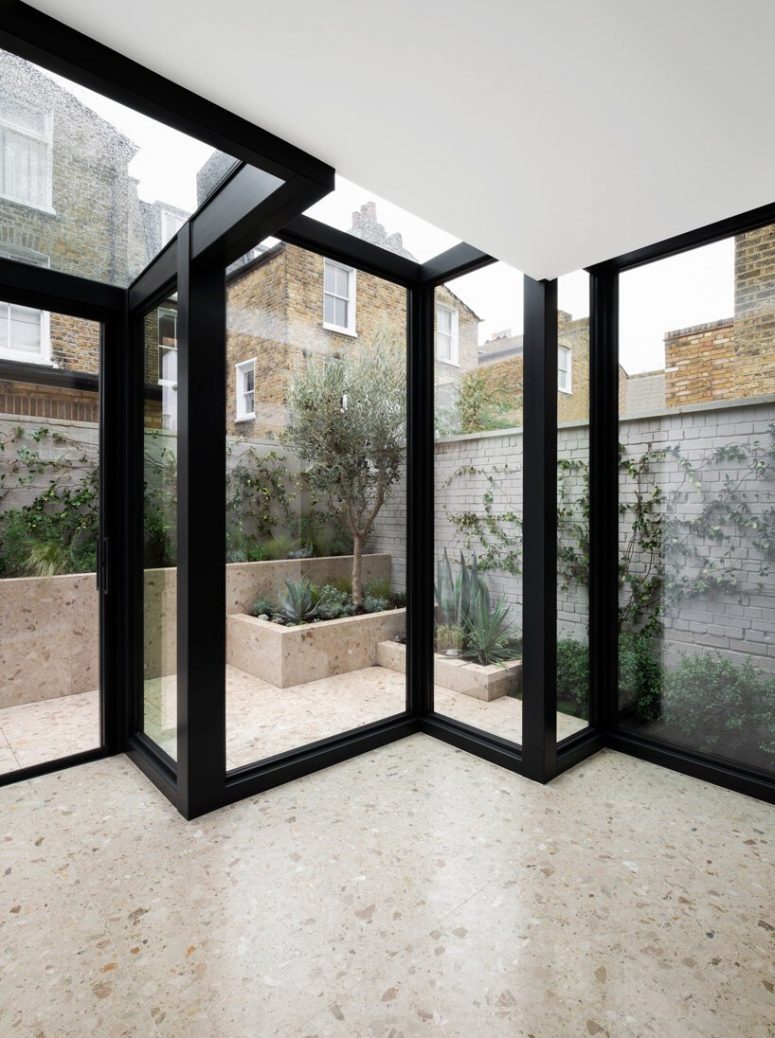 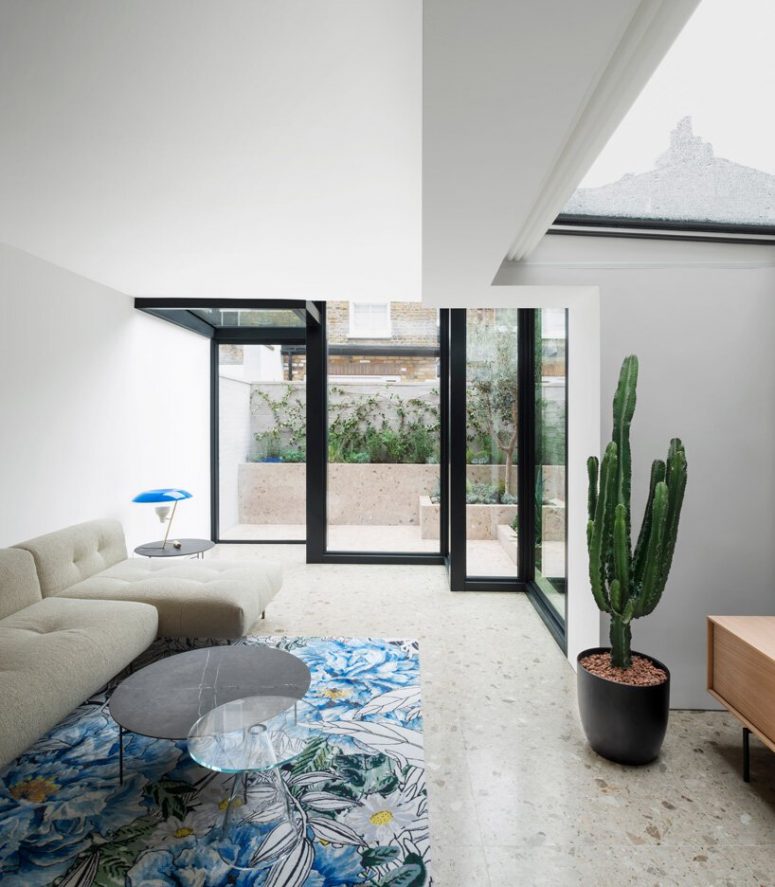 The living room shows off a sectional, a bright rug and a couple of chic tables 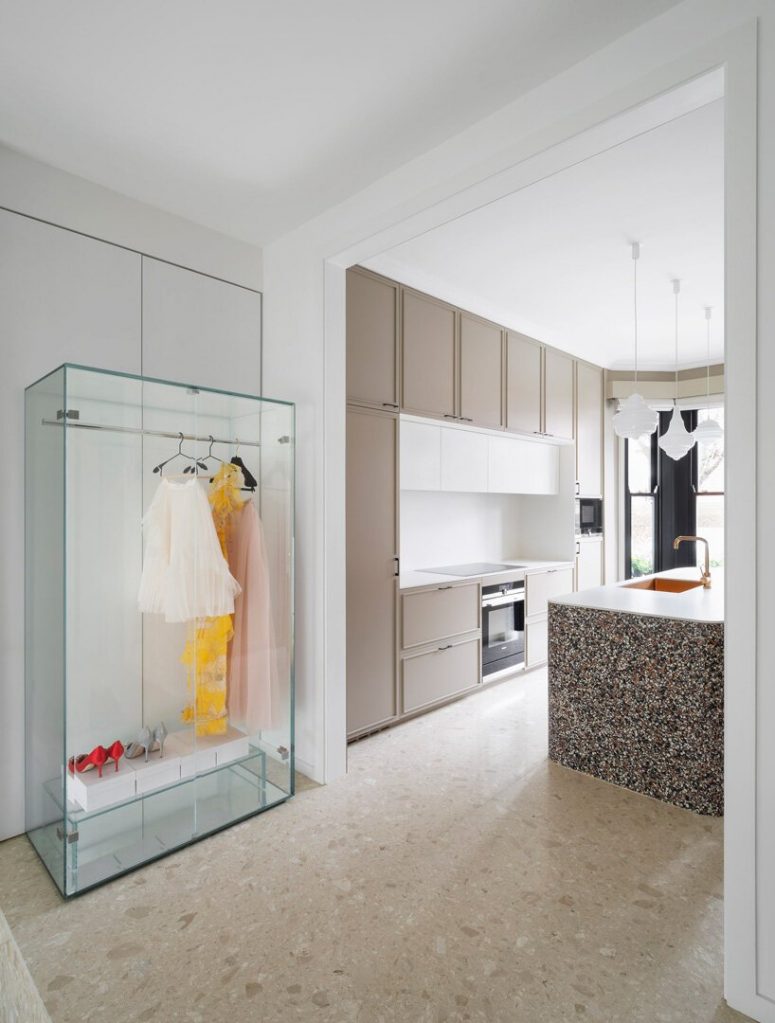 a super stylish and super sall closet near a kitchen 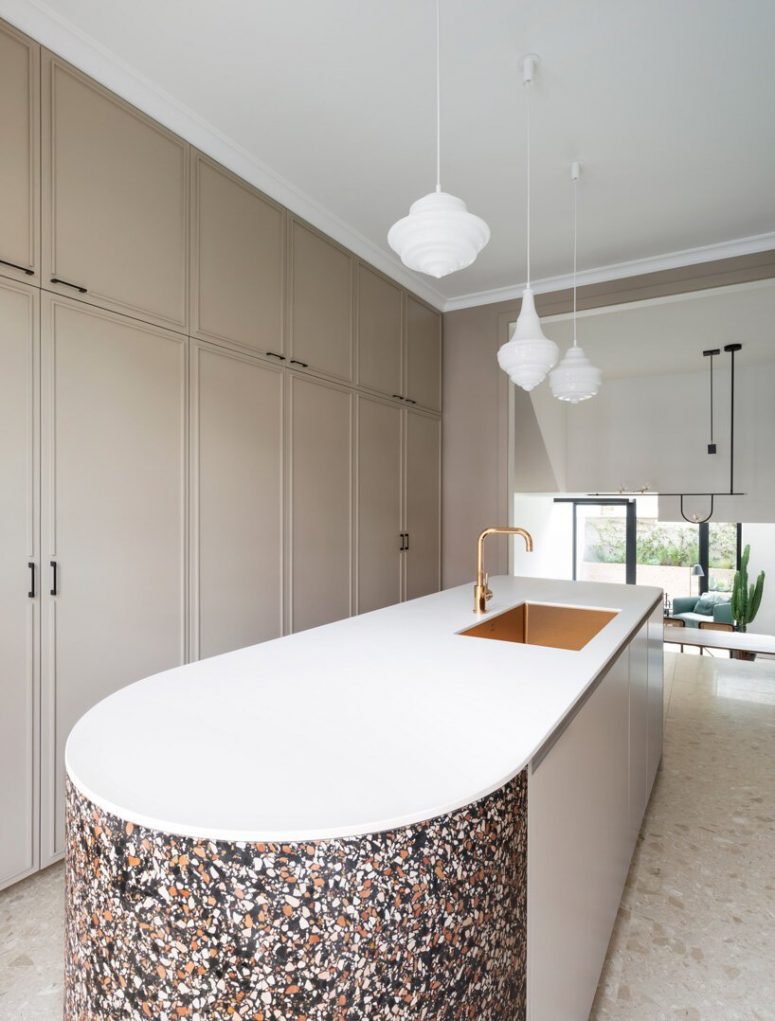 The kitchen is done with tan sleek cabinets that are built-in and are fully closed, while a large curved kitchen island makes a statement with its terrazzo part 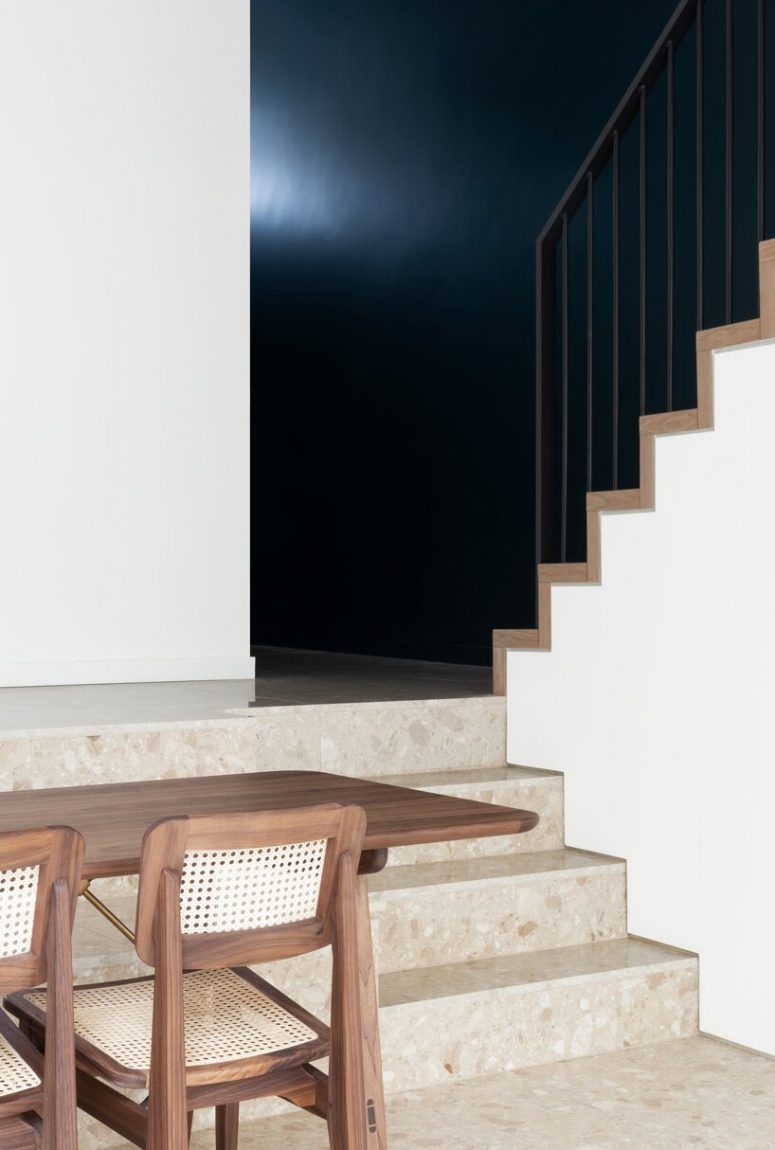 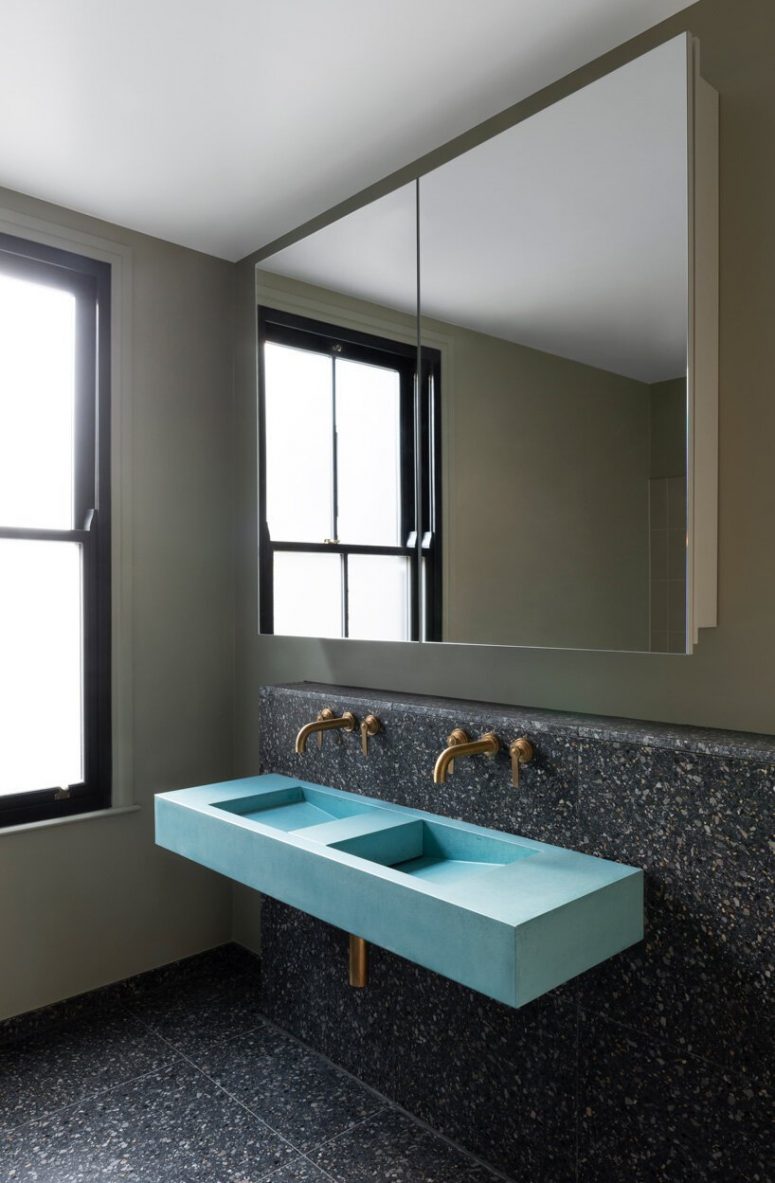 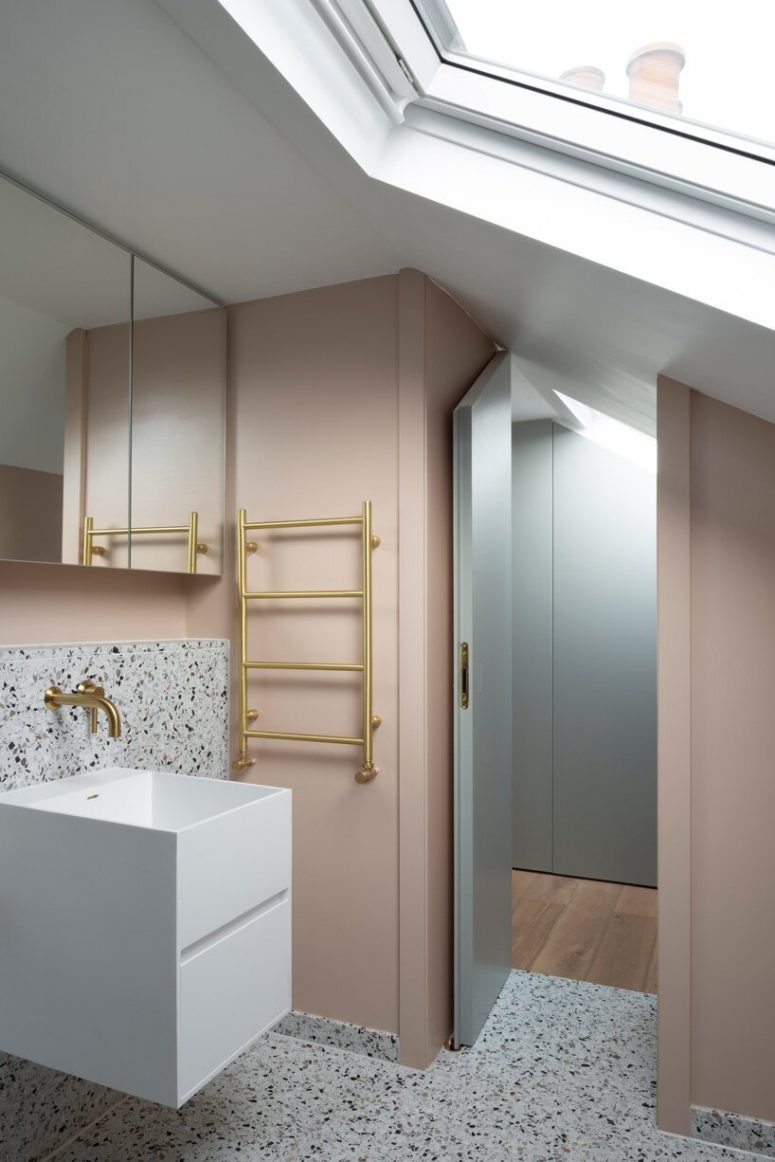 The second bathroom shows off neutral terrazzo, a floating sink and blush walls