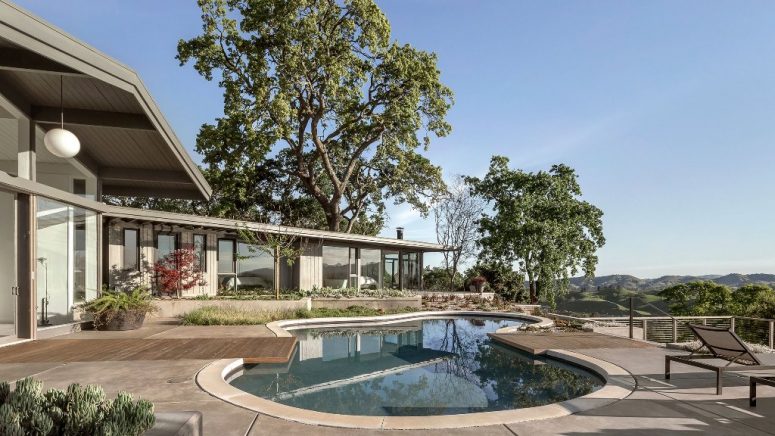 Design collective Framestudio has completed the renovation of this mid-century house near San Francisco, which was designed by architect Henry Hill in a boomerang shape around a swimming pool. The house called Ridgewood is located in Alamo, a suburb 20 miles east of San Francisco, and was completed in 1959 by Bay Area architect Hill. But its history since completion has been “patchy”, including being abandoned, renovated and extended, and had left the house in quite the state.

Framestudio’s refurbishment, designed for a couple who were about to become empty nesters, aimed to preserve existing details where possible, update the house in the style that followed the ethos of its original architect, and fit the needs of the new resident.

The architects preserved the few original interior elements that remained, and connected the interiors with natural surroundings. Following this, the designers added even more windows to the two wings of the house – which feature the bedrooms in one, the lounge, kitchen, dining room, and den in the other. A secondary bedroom received a new glass wall modelled on an existing one in the main bedroom, while the kitchen’s original small windows were merged into one. The den, which was added to the property in the 1970s but had few openings, was also updated with large expanses of glazing, and a new fireplace that referenced the existing brickwork fireplaces in the house.

Other changes include reconfiguring the layouts of the guest and main bedroom bathrooms, a new wine room and the addition of floor to ceiling wood closets in the hallways. Ceilings in the hallway were also lowered to introduce a new air duct system for heating and cooling the bedrooms. All the original single paned glazing was also replaced with double glazing. Throughout the house, the floors are covered in either pale wood boards of large grey tiles, and the walls and wood ceilings are all painted white. The interior decor was updated to follow the style of lesser-known international midcentury modern designers. 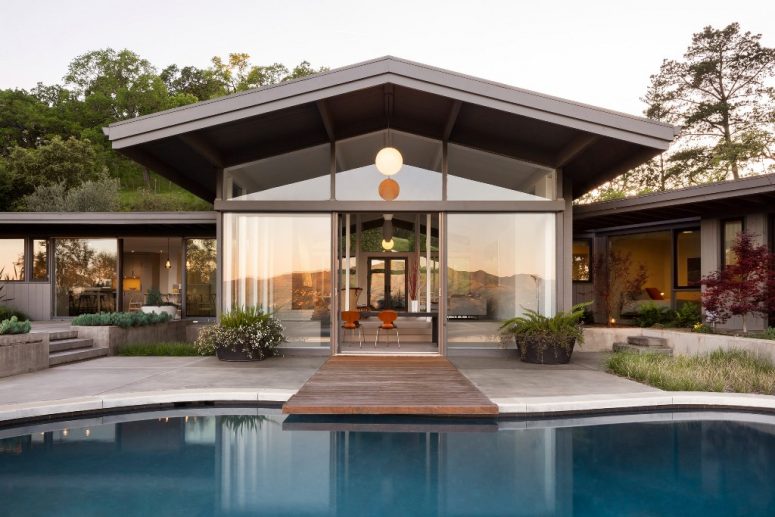 The house has a strong connection to outdoors, there are whole glazed facades and walls 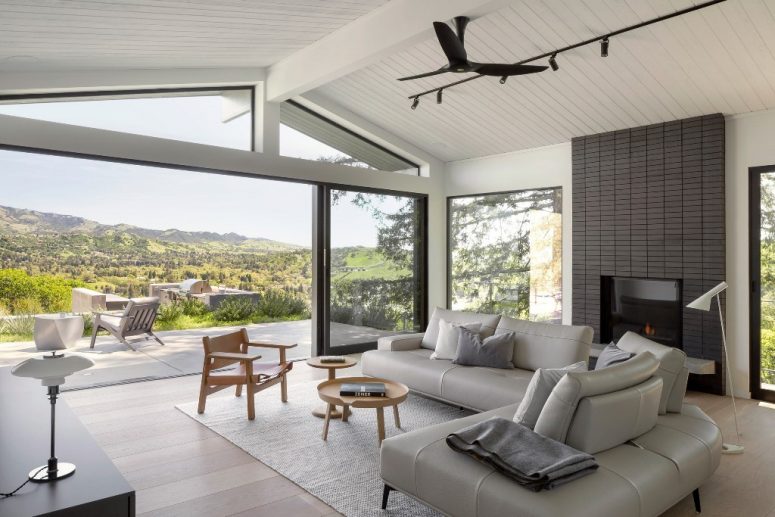 The furniture is modern and contemporary, the color palette inside the house is very peaceful and neutral 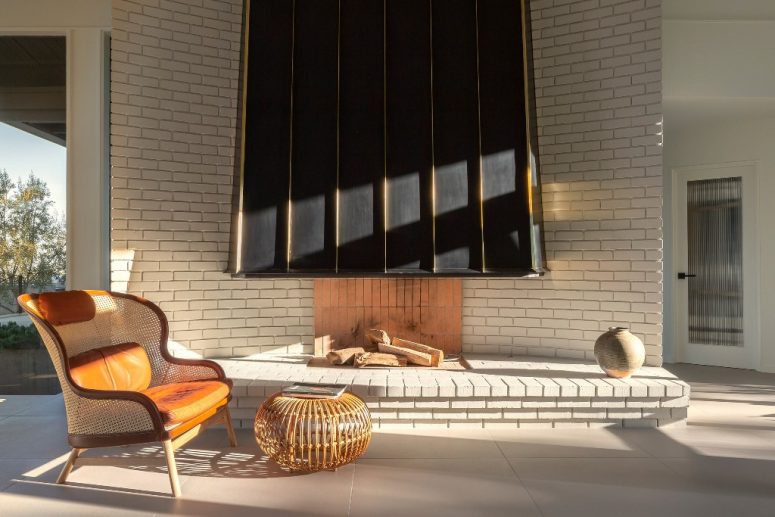 The fireplace is a vintage piece with a brick surround, and it creates a mood in the space 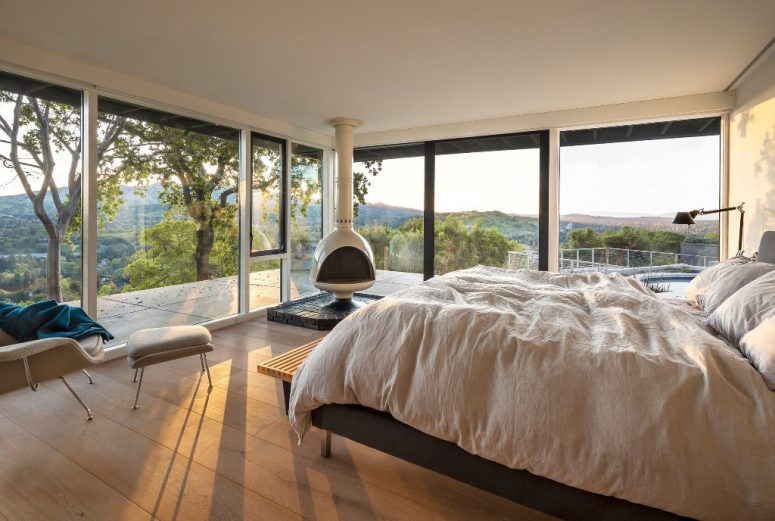 Bedrooms like this one feature fantastic views thanks to extensive glazing 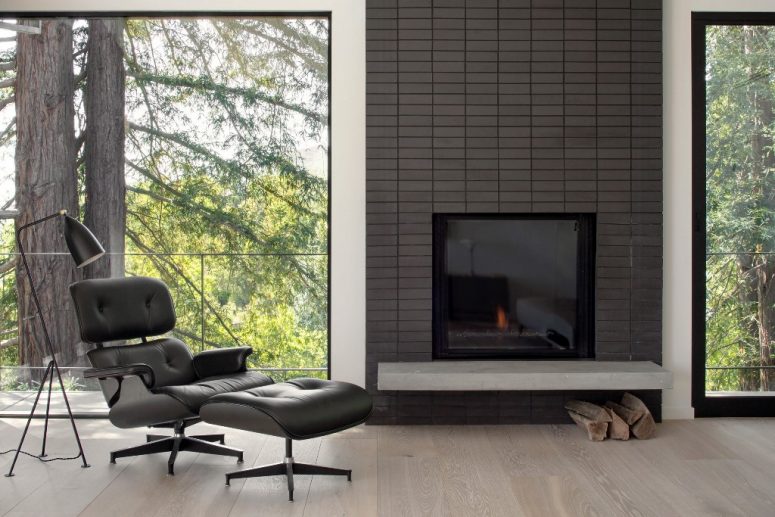 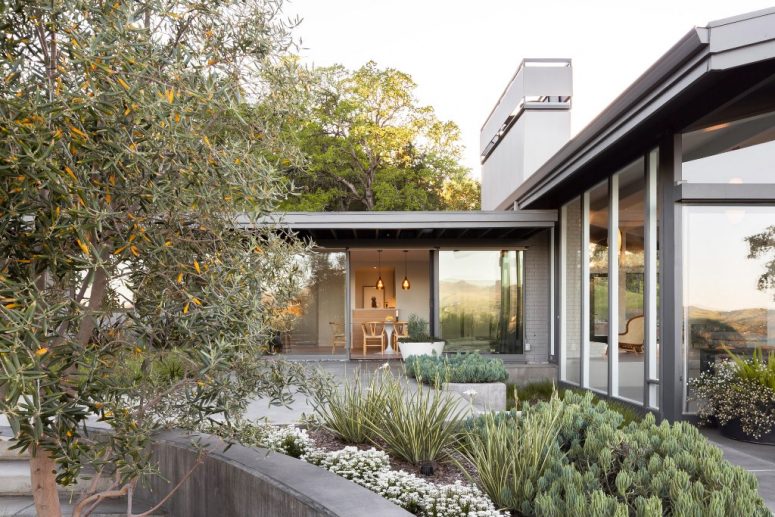