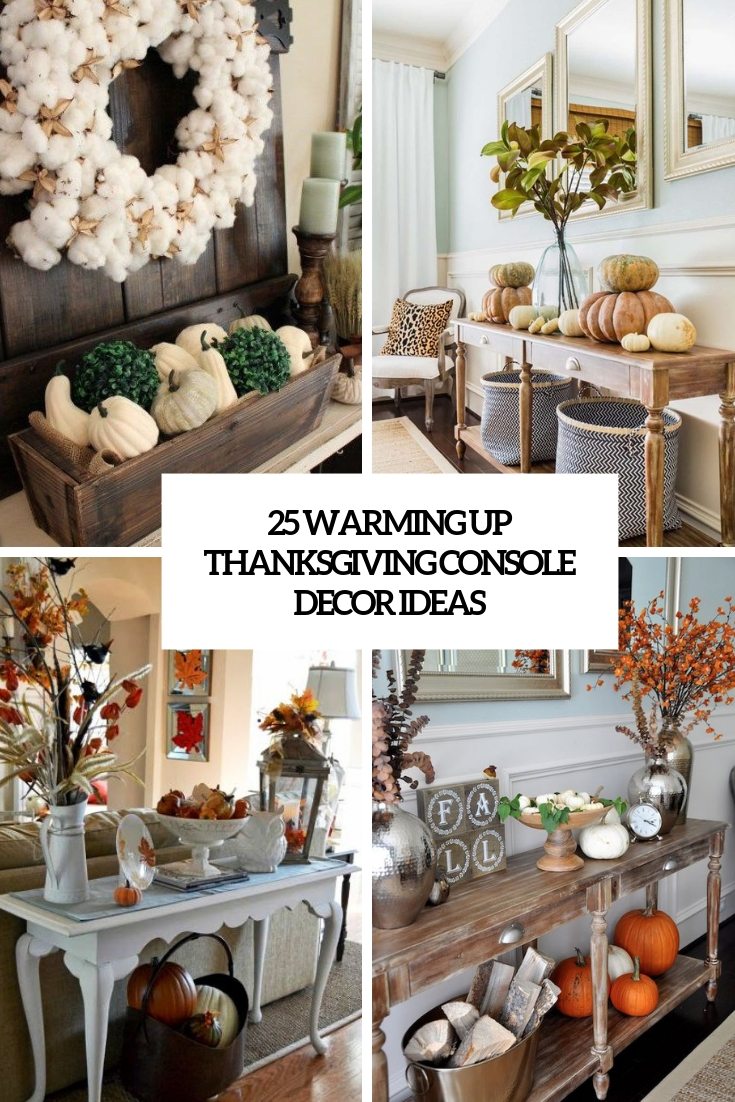 Have a console table in your entryway, living room, bedroom or somewhere else? Style it for the coming Thanksgiving to bring more coziness to the space and to embrace the season. What to put on your table to make it amazing and what colors to rock?

First of all, find out your space style and your console style to understand what elements are preferable. If it’s a minimalist space, be laconic with decorating, if it’s a rustic space, don’t be afraid of many cute decor elements. Rock fall colors like green, mustard, orange, brown, beige or neutrals to make the console feel fall-like and Thanksgiving-like. Here are some ideas!

What to put on your console? First of all, think pumpkins: they are symbolic for fall and Thanksgiving and can be left there after the celebration, too. Decorate them with paints, glitter, letters or just leave them as they are – natural pumpkins are amazing, and velvet ones will add a refined touch. Second, go for greenery and blooms – real or fake ones arranged in vases, pots or as garlands and wreaths. Third, go for various comforting touches: pillows and blankets with pompoms, rustic touches like pinecones, wheat, apples, pears and gourds. 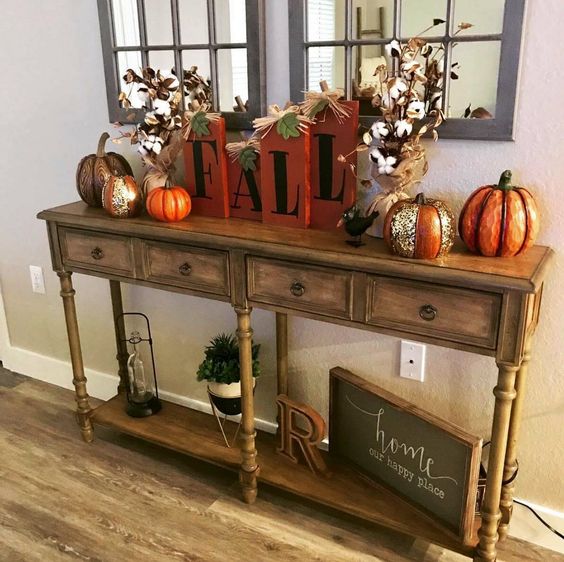 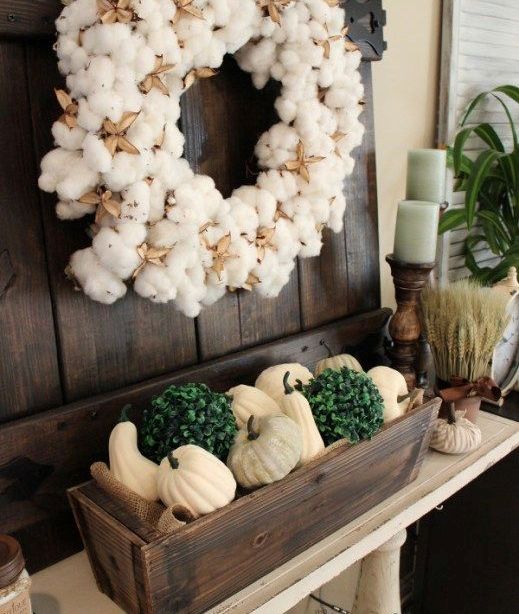 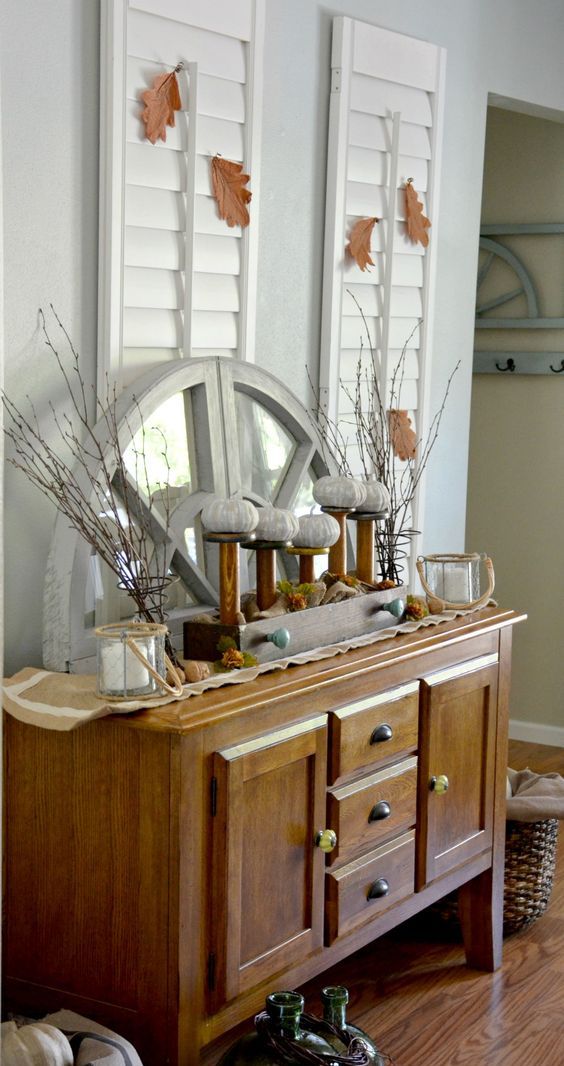 a fall-themed console with little white pumpkins on stands, moss, leaves and branches 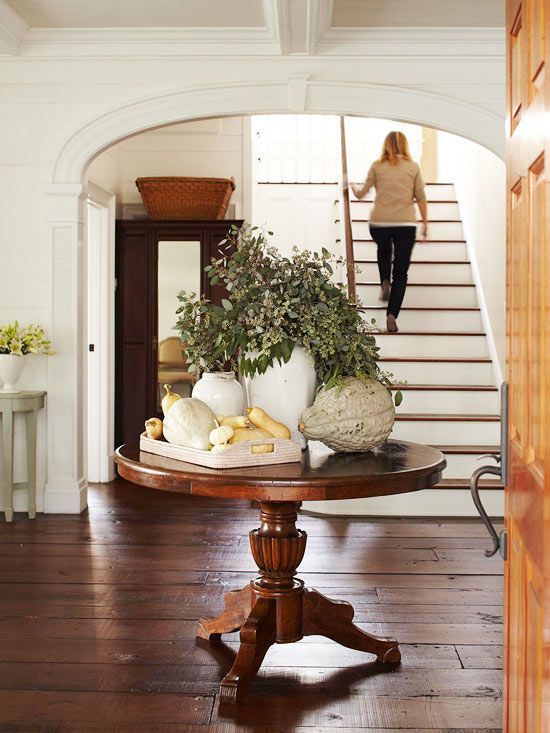 a large console table with fresh greenery in a vase, a wooden tray with pumpkins and gourds and an oversized pumpkin 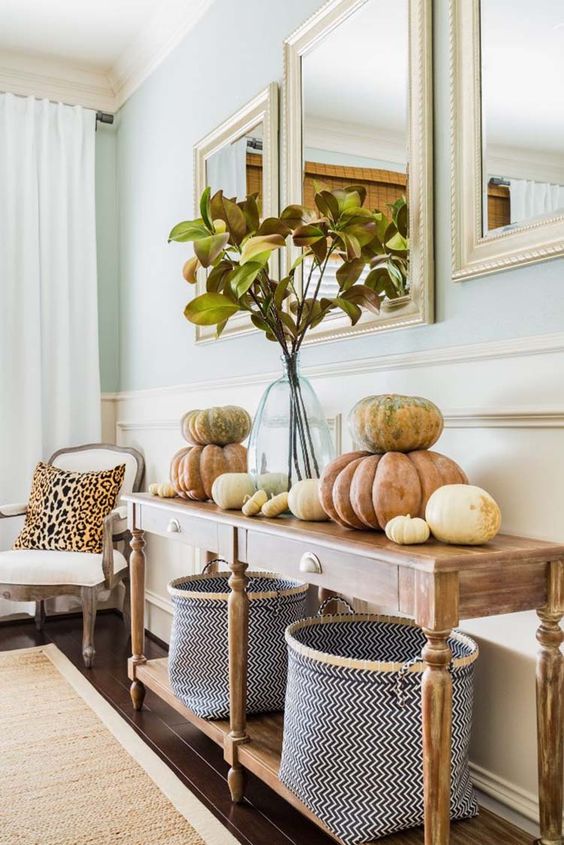 a natural console with fabric baskets, real pumpkins and branches with leaves in a clear vase 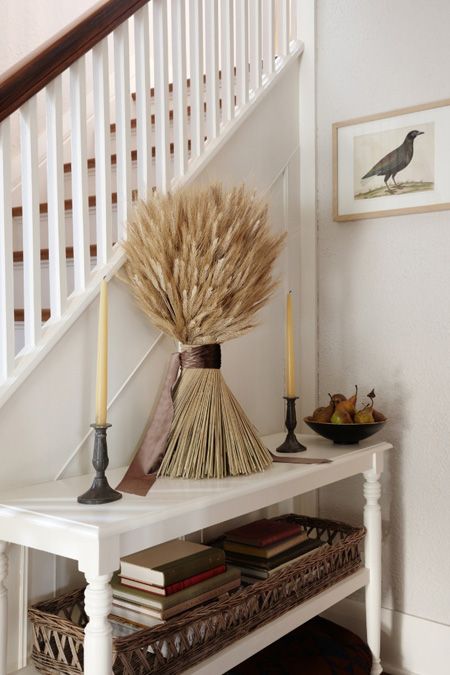 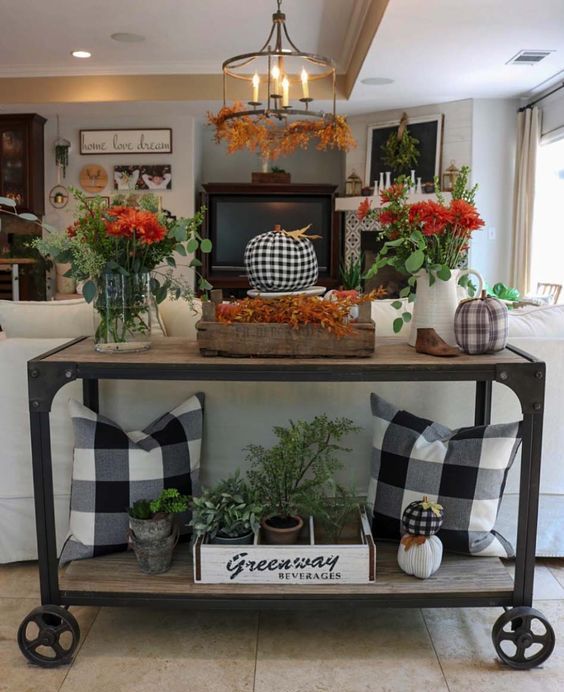 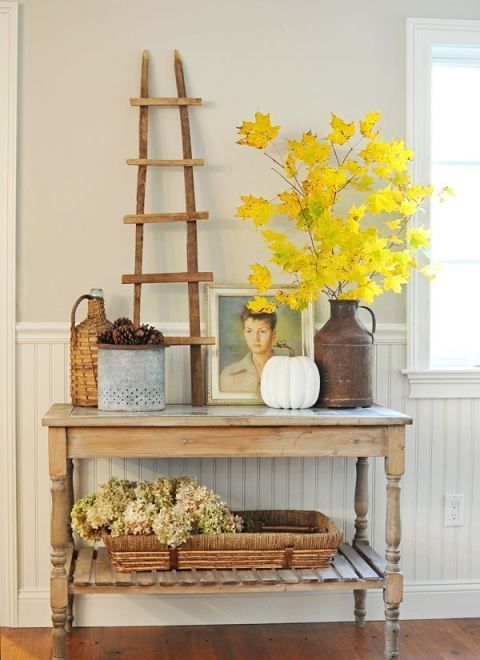 a rustic console with a fall leaf in a metal vase, pinecones, a fake pumpkin, hydrangeas in a wicker tray and artworks 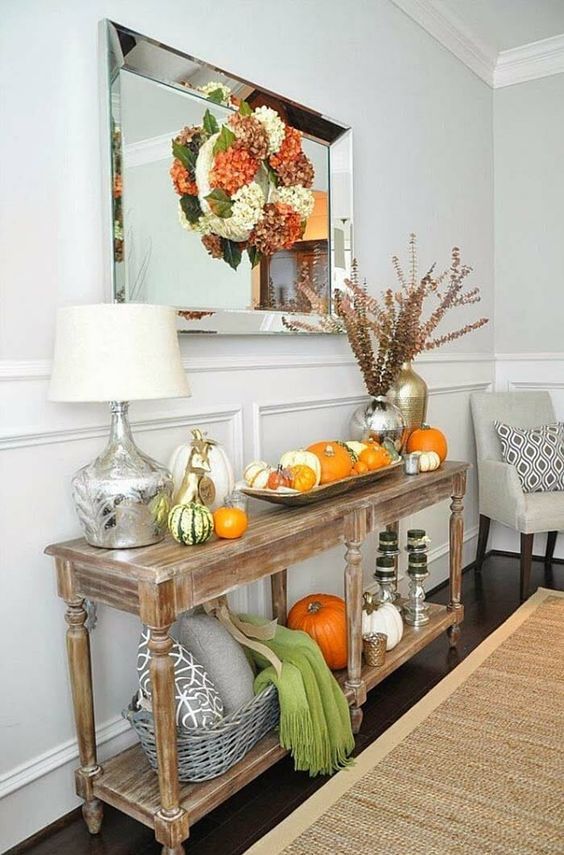 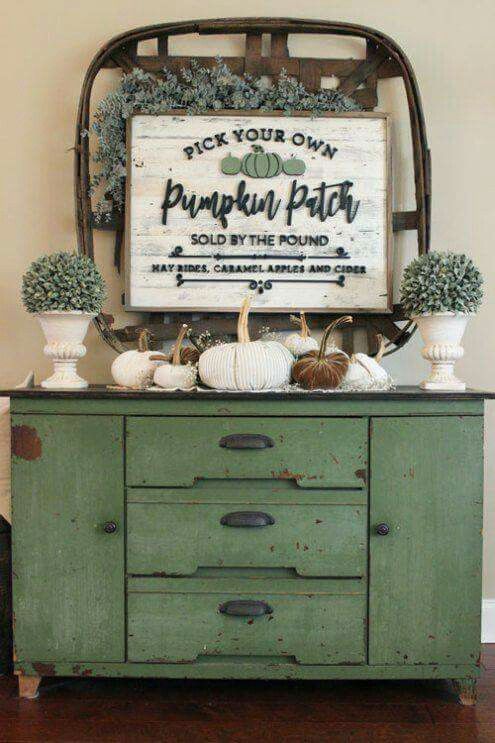 a vintage and rusty console with fabric pumpkins, faux greenery in pots and cool decor on the wall with a sign 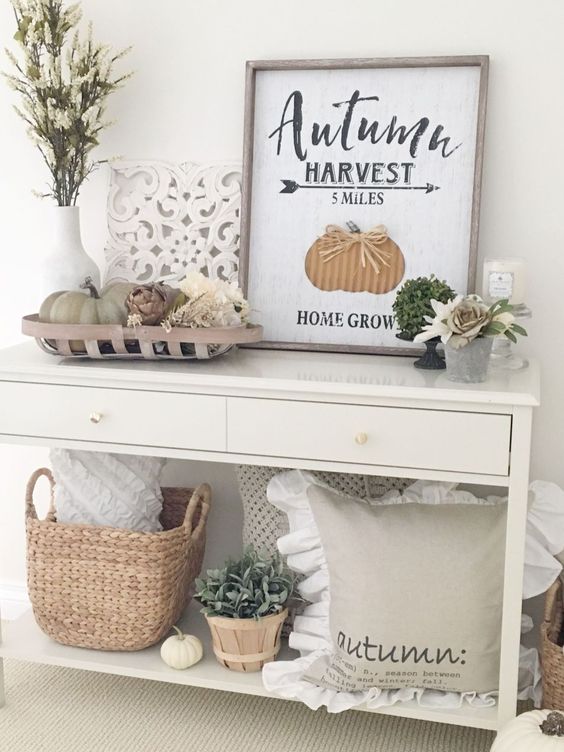 a simple console with faux pumpkins, a basket, a pillow, greenery and a fall sign plus fresh blooms 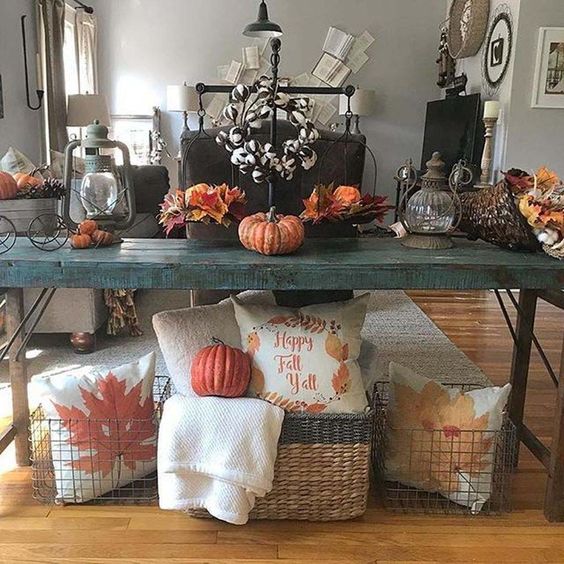 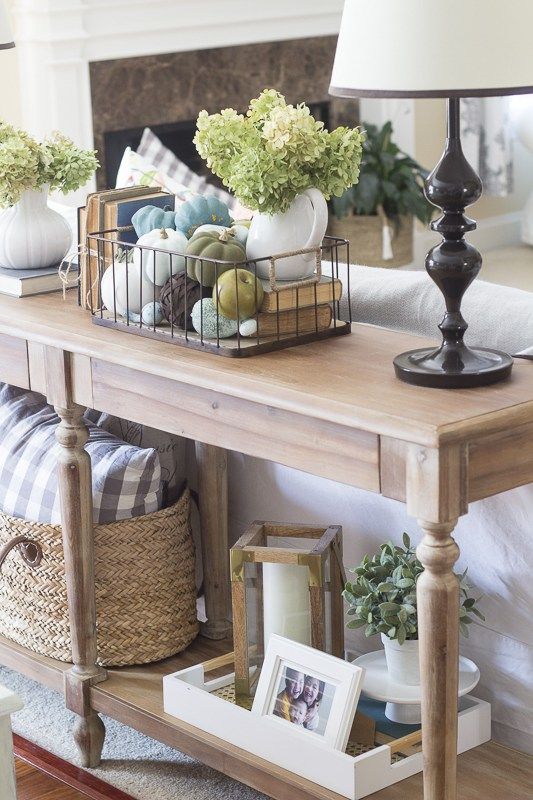 a vintage console with a wire basket with fake pumpkins, fresh hydrangeas and some candle lanterns 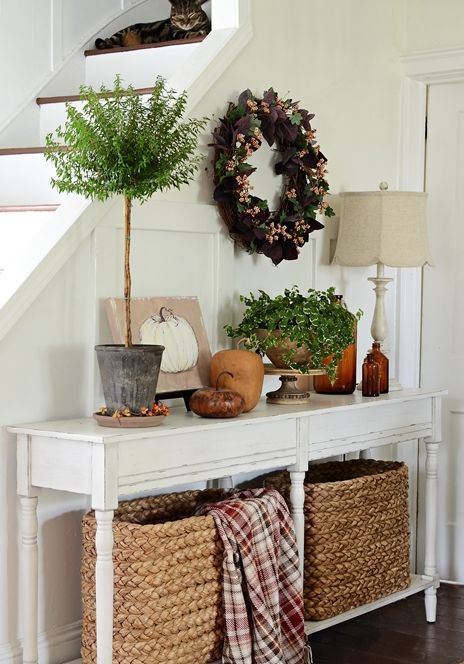 a vintage console with baskets, faux pumpkins, potted plants and a wreath of fake leaves and berries 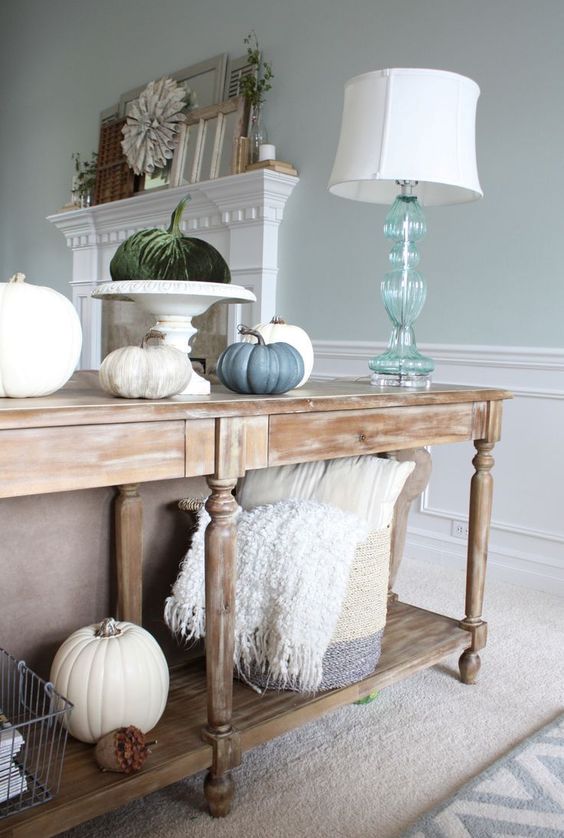 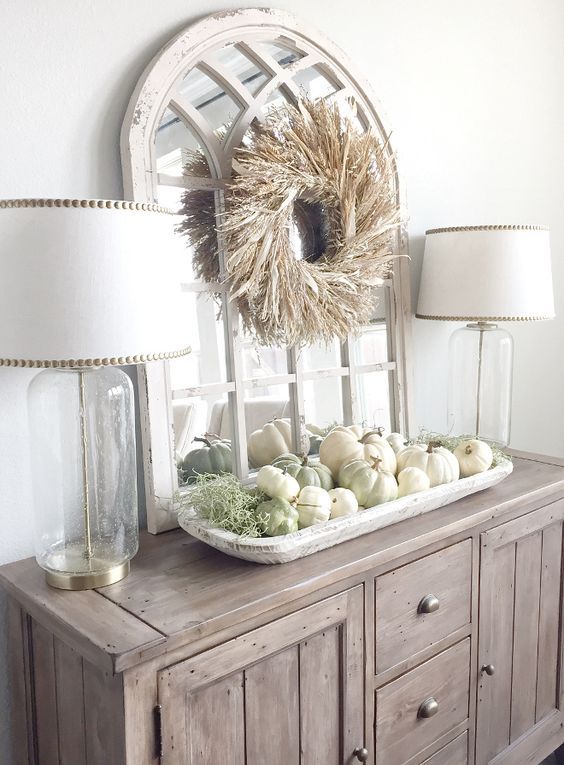 The Space Under And Over The Console

You may also decorate the lower part of your console, place something under it or hang something over it. These can be pumpkins, gourds, apples, pears, greenery and blooms of various kinds, pillows and blankets – you may store them there, fall leaves in arrangements or in bowls and boxes. Hang some artworks and signs inspired by the fall and make cool wreaths of cotton and real or fake greenery. Get inspired by the ideas below! 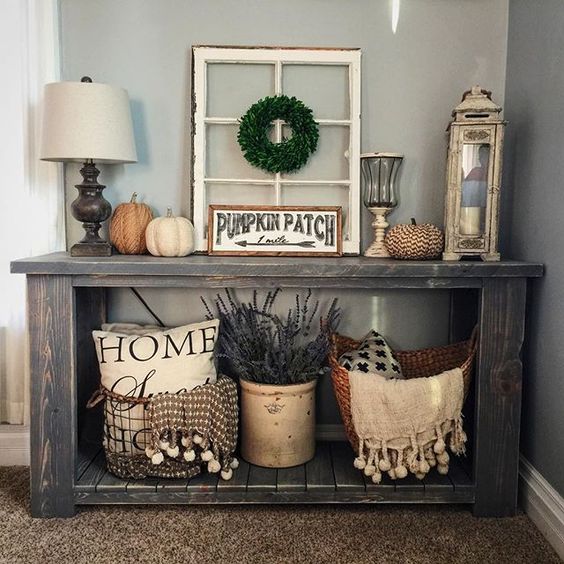 a rustic console with fabric and decopuage pumpkins, lavender, a boxwood wreath and scarves with pompoms 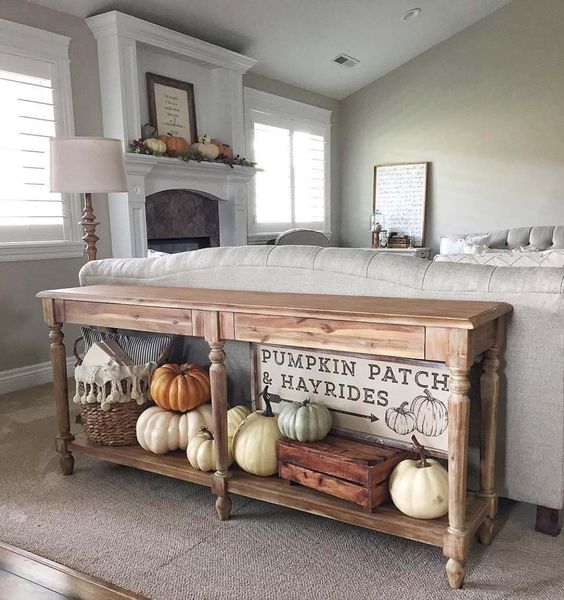 a rustic console with heirloom pumpkins and a basket, plus a cool sign 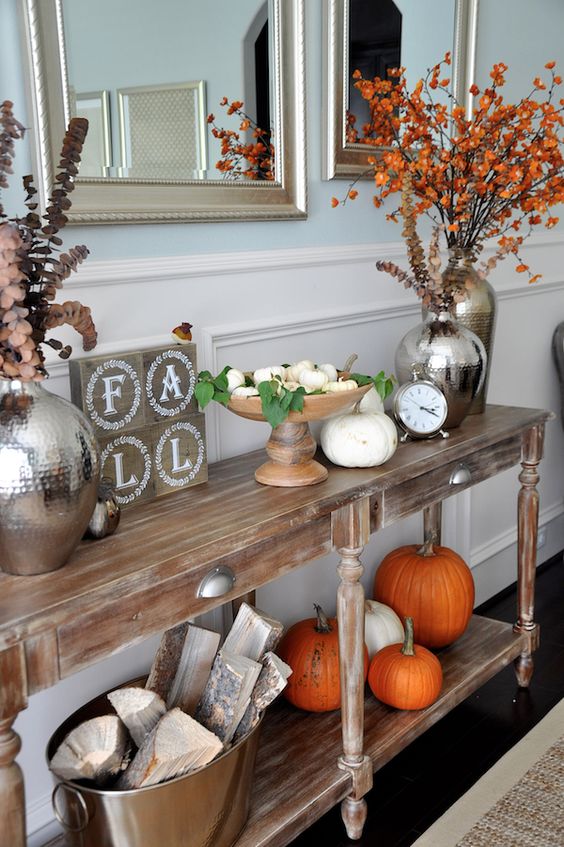 a vintage console with real pumpkins, dried herbs and greenery and firewood in a galvanized bucket 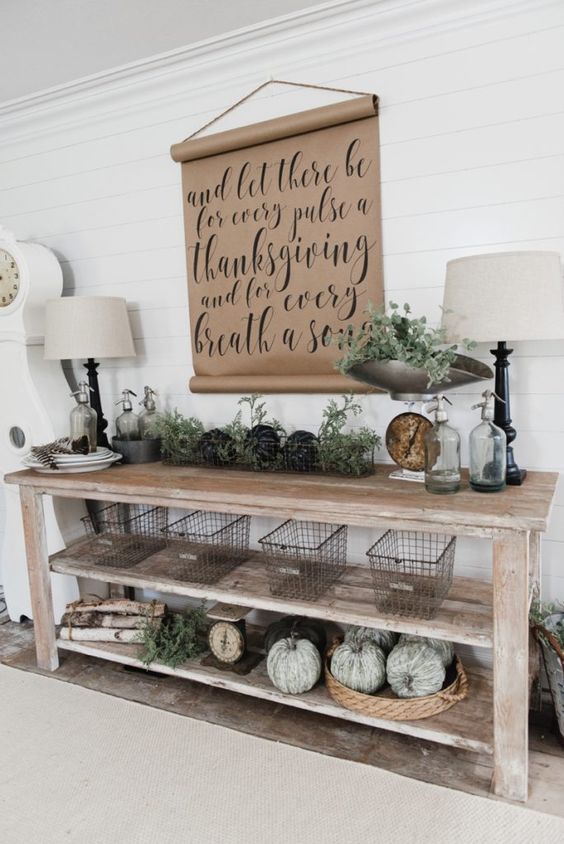 a vintage farmhouse console with heriloom pumpkins, metal wire baskets, foliage and a kraft paper sign over it 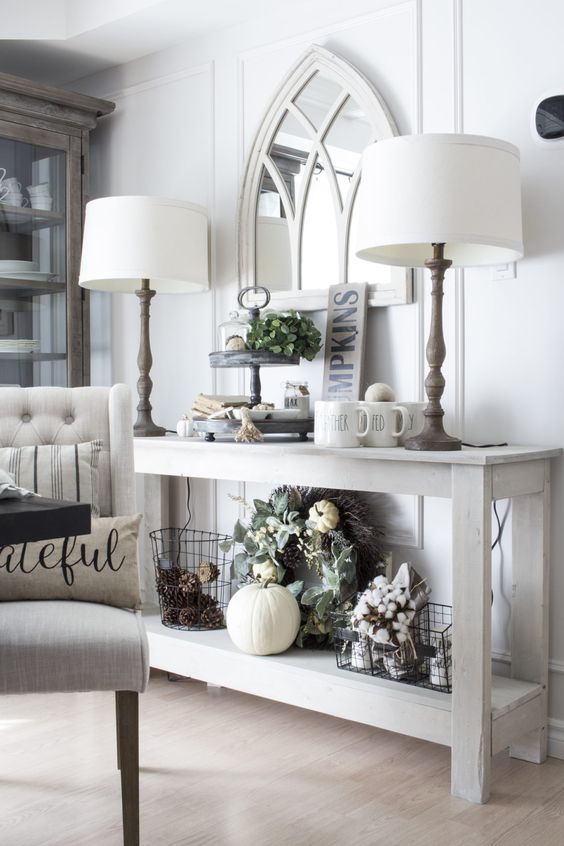 a vintage farmhouse console with mugs, cotton arrangement, pumpkins, greenery and pinecones in a basket 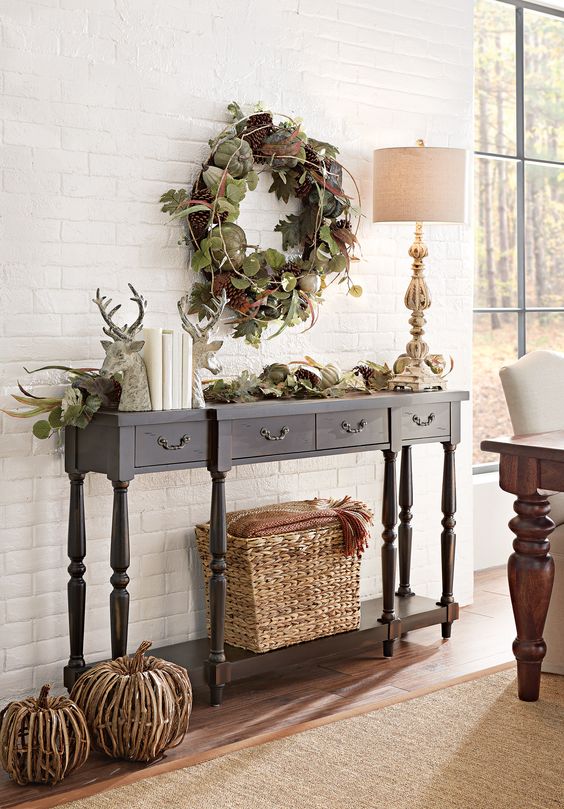 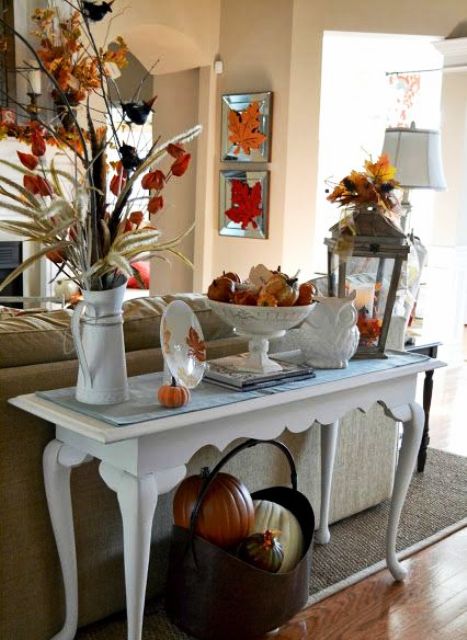 an elegant vintage console with faux pumpkins, leavesm dried blooms and a metal basket with pumpkins 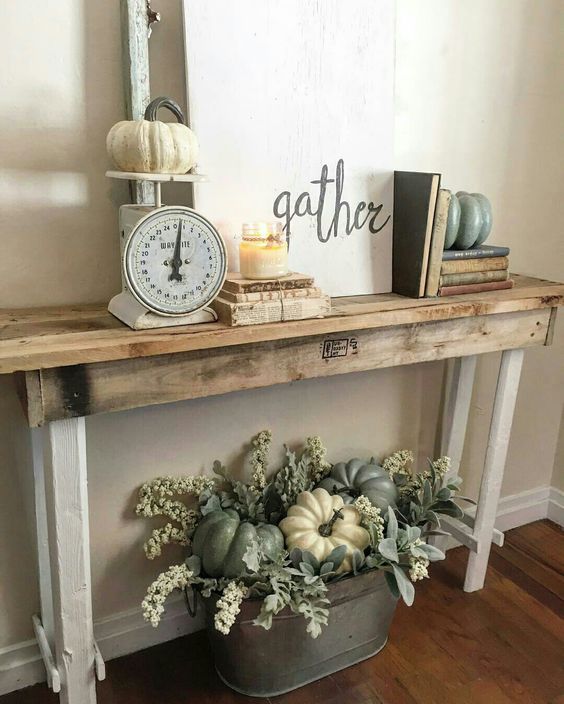 an industrial console with vintage scales, a candle, a sign and a metal bucket under the console with fake greenery and pumpkins 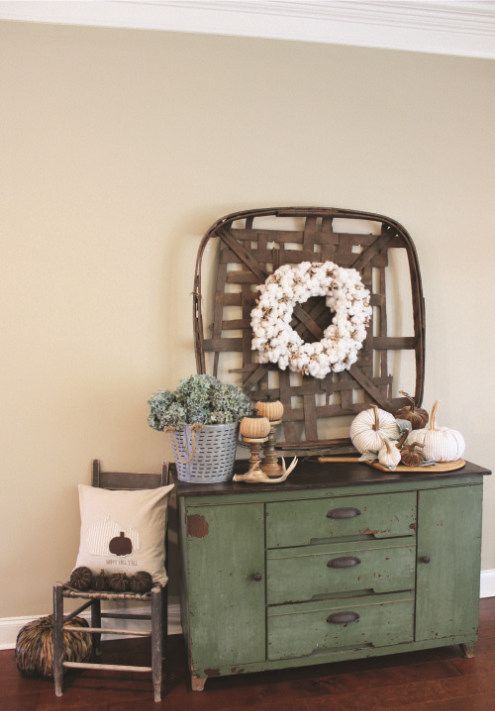