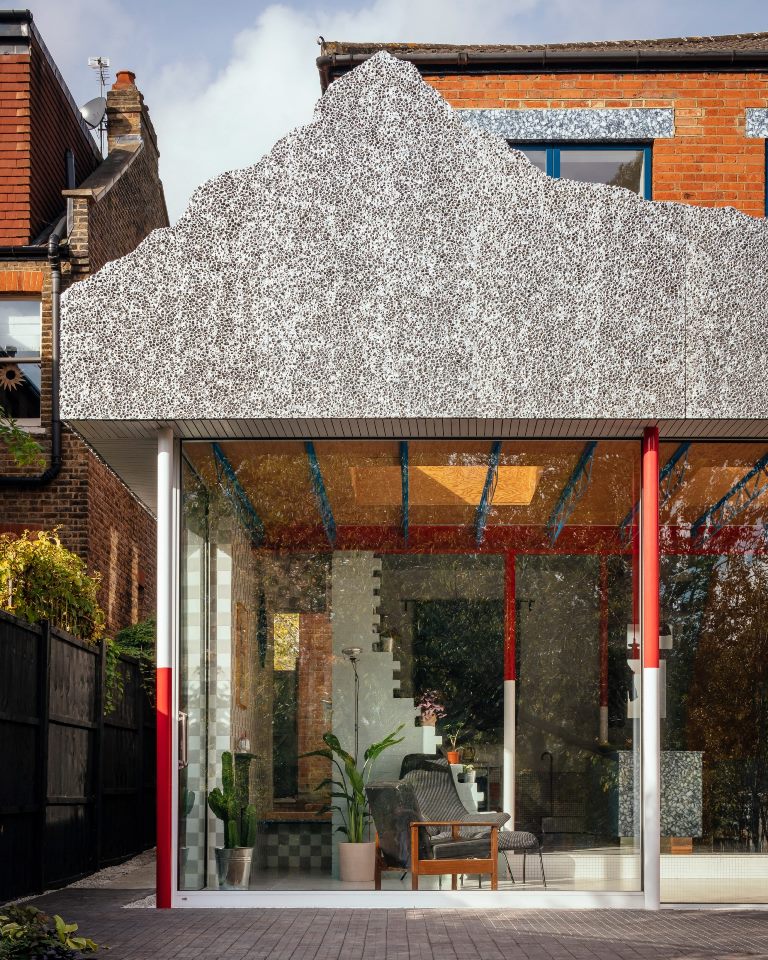 Architect Mat Barnes, founder of CAN, renovated and extended the two-storey Edwardian house in Sydenham for his own family adding a fake Disneyland mountain of foamed aluminum to it. This element is designed in tribute to the Matterhorn Bobsleds ride at Disneyland in California. This element gives the project its name, Mountain View.

The imaginative details don’t end there. The house also contains a monochromatic lounge filled with architectural fragments and a kitchen made from recycled chopping boards and milk bottle tops. The renovation centers around the rear extension, which made it possible to create an open-plan living and dining space opening onto the garden.

Instead of fully demolishing the original rear walls, sections of them remain. They create a soft partition between the kitchen and dining area in the original part of the building, and the new lounge space beyond. The kitchen is designed to stand out, with alternating panels of blue and grey. There are further references to mountain geography, such as structural columns painted red and white like ranging poles, or the south-facing wall with its rough, rock-like texture. At the same time, there are plants and artworks spanning floor to ceiling, including a mosaic-tiled staircase and a pair of cartoon-style arrows.

The living room at the front of the house was envisioned as a contrast to the multicolored rear. Almost everything in this room is painted in the same shade of blue, including the architectural moldings that decorate the walls.

The redecorated family bathroom features an orange ceiling and chequerboard-patterned walls, made of blue and white tiles – a reference to an old fireplace in the house. The hallway is noticeably calmer, with white walls, exposed wooden floorboards and a glazed ceiling. Here, the changing daylight gives the space its character. 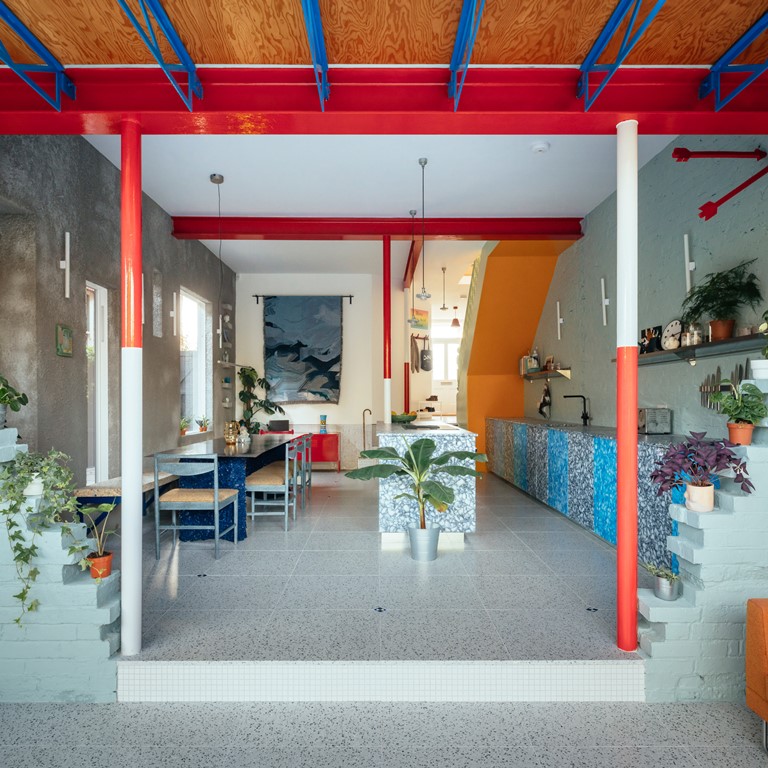 Inside, the house is filled with colours, patterns and playful references 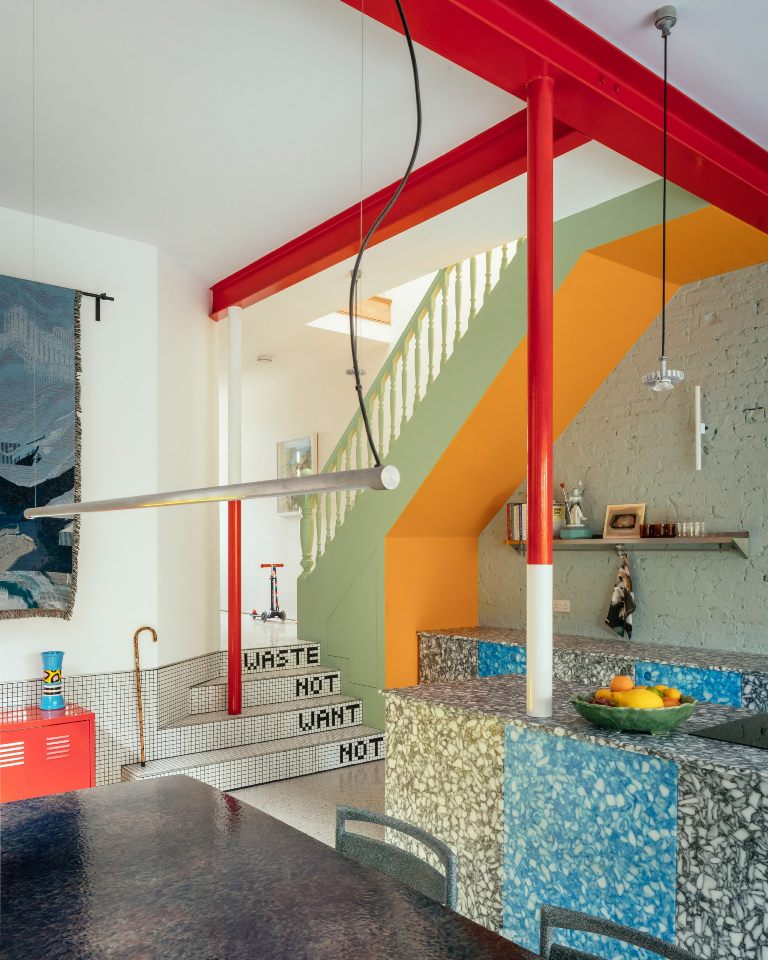 The kitchen is grey and blue, and you may see red and white pillars here that add color 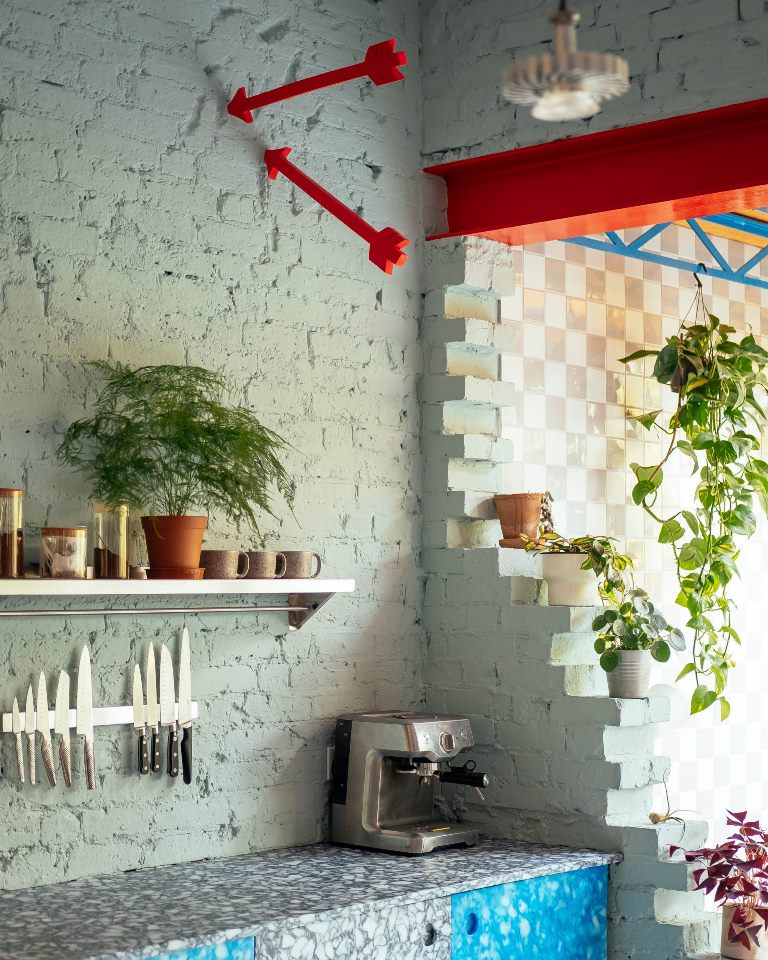 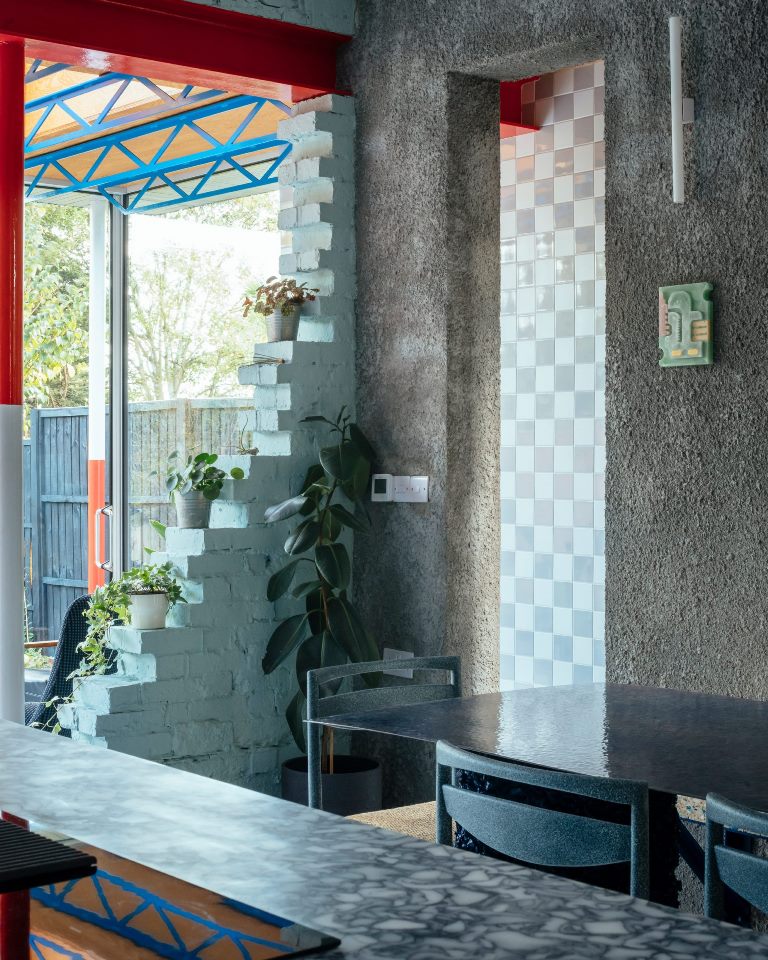 Half-demolished walls separate the kitchen from the lounge 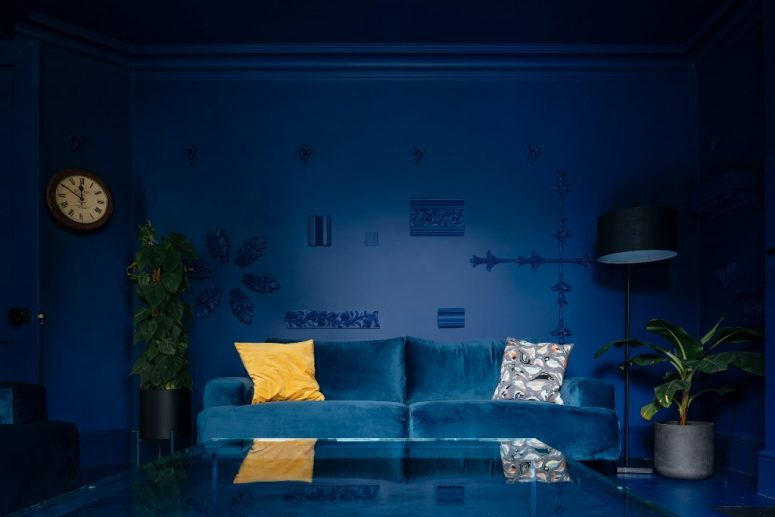 A monochromatic navy living room is decorated with architectural fragments 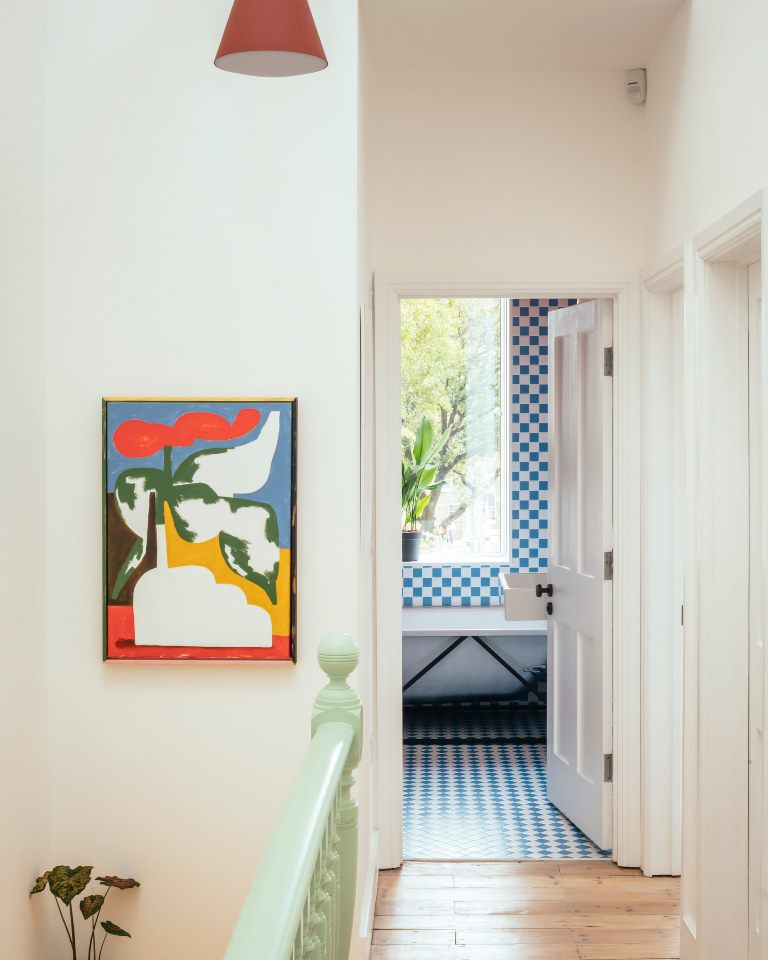 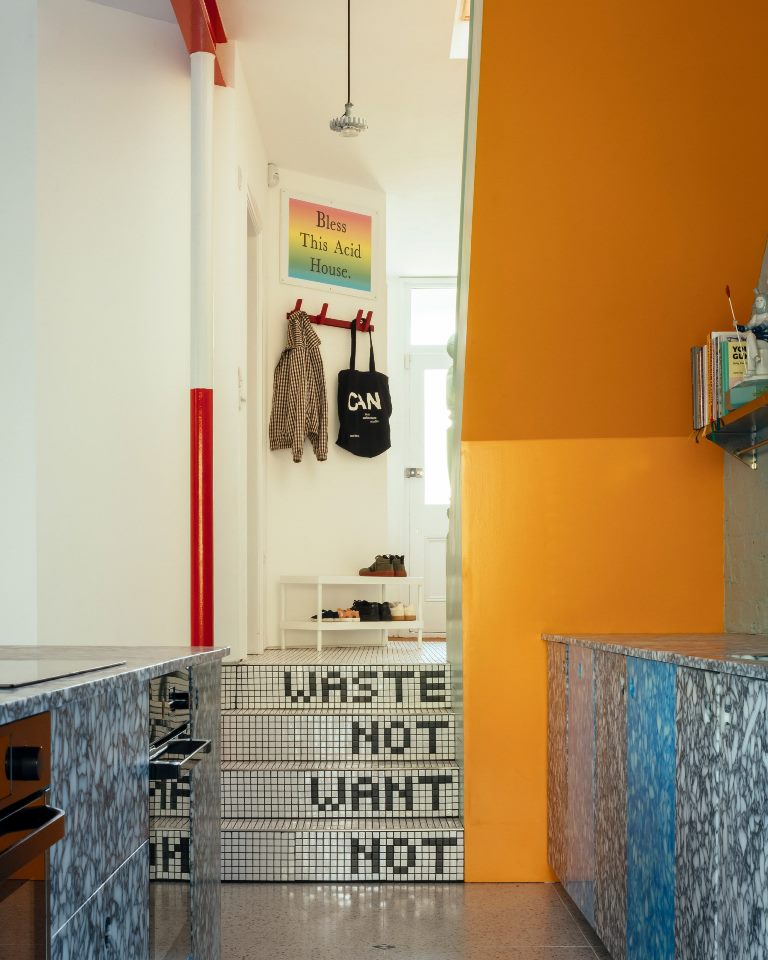 A mosaic-tiled staircase is accented with a message 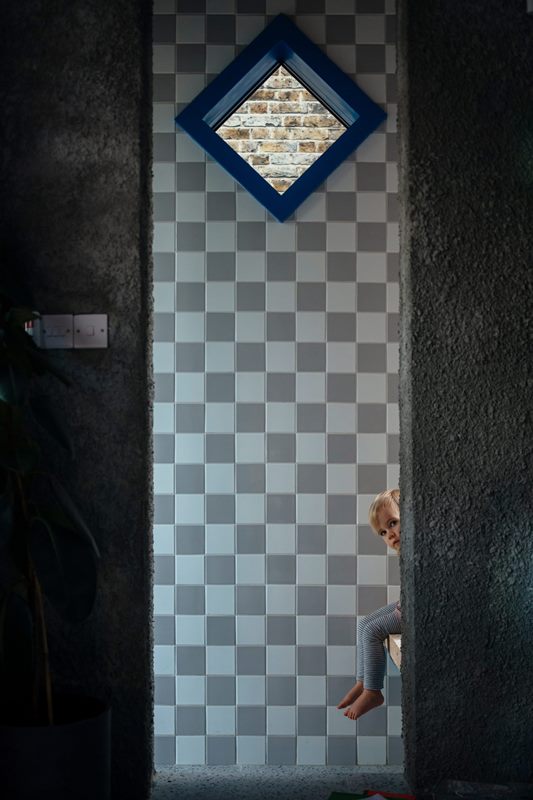